Back in 2001, when I turned 30, I decided that I was going to take one picture every day of my 30th year and put them in a journal. I actually used a poloroid camera so that I could have the picture immediately. It turned into a pretty neat project for me. My birthday is in August so I had only been doing it for a little over a month on September 11th.

Aside from capturing my own impressions of that world event which is priceless to me, it also made the mundane times of my life that year memorable. There is a really nice dinner out with old co-workers I would have never remembered, the day I bought a large pottery bowl that I still use, a French themed dinner at Deanna's old house, me, holding Baby Liv in my arms on New Years and for some reason I have beautiful hair in many of the pictures. (I would not have ever described myself like that and it's nice to know at one time I did, indeed, have good hair. I usually leave that up to Jen.) Who the heck was doing my hair at that time??? Where is that person??? I never have beautiful hair. It's long and thick looking (in the photos.) Was I wearing a wig? I think I was using velcro rollers back then when I blow dried my hair..... (Christmas Idea for anyone who is wondering what I would like-VELCRO ROLLERS!!!)

I always thought that idea would make an interesting blog.

View From The Prairie Box is Having A December Photo Project where people are doing just that! I've decided to participate.

I'm a few days late to the party on this so I'm going to play catch up.

You can consider my 1st picture that new blog header. It's my front door. I love Williamsburgh style decorating and my aunt bought that for me a few weeks ago on a girls day out. I love it.


The same aunt surprised me with some Antique German Glass Christmas Ornaments a few days ago.

My antique school desk with a pile of Christmas Videos from the library that my girl watched all day today as she languished on the couch with a 103 fever. She hardly moved all day long and hardly ate a thing. Poor baby... She wouldn't even eat the gingerbread cookie her grandma bought her yesterday. I don't think she has ever watched that much consecutive TV in one day. And I don't think she really enjoyed it... She even missed a birthday party this afternoon that she cried and cried over. 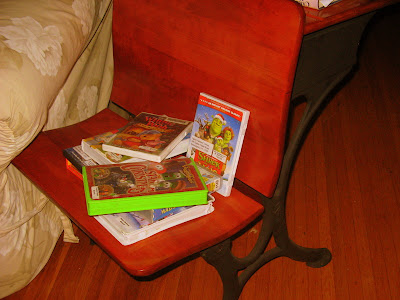 Blogging with fire and eggnog this evening..... 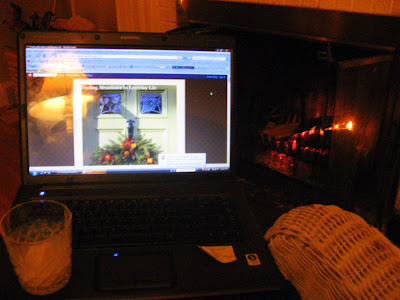 Labels: About me, December Photo Project

Poor Emma! I hope she is feeling better today. Great pictures!
I love the green color on the door--one of my most favorite shades of green.

I am also sure you know I love the ornaments. SO pretty!

Keep snapping pictures. I enjoy them!