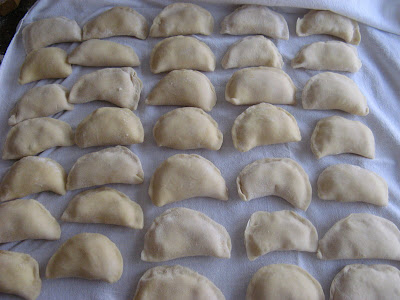 Today my grandma and I made 90 Pierogi.  I'm so proud of this picture because in it, you can hardly tell mine from hers. (I can tell of course) but I've been getting better and better as the years go by. These have not yet been boiled.

It took us about 3 1/2 hours but it seemed to go by quickly. 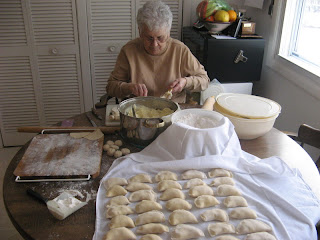 Like last year, we talked and talked. When I really listen to her (I mean with my heart, and not just my ears) I  get some real life truths from her.  About her, and life in general. I'm glad I'm old enough (or wise enough) to appreciate them. Today we discussed how lucky women are today as opposed to back when she was younger. (For a huge variety of reasons) We also discussed my cousin's wedding in England that took place yesterday and my aunt and uncle who will be with us for Christmas Eve.

Bob wandered in and out all day long.

For lunch, my grandma served soup that she made from the Turkey carcass that I sent home to her on Thanksgiving (she asks for it every year) It was a simple soup of rice, carrots, onions and turkey. It was delicious. My grandmother and Bob are not poor people and yet, they are simple and conserve.

Bob told us stories about having only a chicken for Christmas dinner growing up because they could not afford a Turkey. He also has really neat stories about being an Ice Deliver man with his own truck and route when he was a young man.

When we were finished we watched a DVD that someone had sent Bob from the History Channel. They waited for me to watch it because they have no idea how to work the DVD player in their Big Screen Plasma TV....  The DVD included a part that featured the ship Bob served on in WWII, The USS Enterprise. The interesting part was the footage was from when Bob was actually on the boat and from a battle he participated in. At one point they show an ariel view of many ships racing somewhere and engaging in battle. I asked him if he can remember seeing all of those other ships around his, and he does.  He was pretty excited to talk about it. It was interesting to listen to. (Did you know that many ships in WWII had ice Cream parlors??)  I told him to bring the DVD tomorrow so that we can all watch it.

You can find the recipe for the pierogi here if you are interested.