I made my Sunday soup this evening. 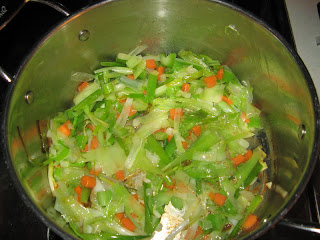 I really really like leeks but find them rather expensive at the grocery store, thus the reason that I planted so many. I bought 1, $3 pack of leeks at the nursery this year. They come in one big clump and you can separate them and plant each one, which is about the thickness of a piece of grass. I planted every single one in the package. They look all funny and bent over at first. Then, with 6 or 7 months to spare, you have a field of leeks. It's a pretty great deal actually. $3 and a little patience. (which I usually have in short supply.) Deer don't even eat them so they don't take up room behind the fence.

At any rate, at this time of year I am judiciously using them and looking for new recipes. I had been looking for a potato & leek soup recipe, and while this one has potato in it, it's not very much, just to add a little depth I think. This soup is all about the leeks!

I get most of my recipes from epicurious.com, which is the recipe site for Bon Appetit and Gourmet Magazines.  Their search engine is great and if you can think of something you would like to eat, you can probably find a recipe for it, complete with ratings and comments. Also, it's probably the best version of whatever item you are looking for. However, once in a while, these foodies take themselves WAY too seriously. This recipe calls for 1 Turkish bay leaf or 1/2 California Bay left. Really? Seriously? Am I really to believe that the California Bay Leaf is oh so much more pungent than the Turkish that I would need to determine which one I have in order to make this recipe???? Seriously???? My bay leaf comes off of a wreathe that I got fresh and dried. I have no idea what kind it is. A dutiful cook would maybe google images of the leaves and then compare them to what she has. I didn't do that. I split the difference and included 3/4 of one leaf. The soup tastes just fine.
Posted by Christine at 12:01 AM

I love leeks! Someday I may have Ito try growing them. I usually get them at the farmer's market for $1 a bunch and freeze them, but I didn't get to that this year with the new baby and all.

$1 a bunch is a steal!!!! They are really easy to grow once you get them in there.