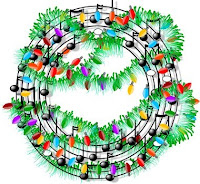 I'll let you in on a little secret. I'm pretty much over Christmas at this point.   I've overindulged on food & drink & family (Don't worry, I told them this already-I think I gave my brother's wife instructions not to call until after New Years anyway.)

And Christmas songs. I started listening to Christmas songs at Thanksgiving which was clearly a mistake.  By Christmas Eve day I needed to put on  my iPod to drown it all out. I listened to Fleetwood Mac and my family listened to Bing and Frank (Oh my, high on my list of irritations is 50's style rat pack banter...."a Little Toddy for The Body"...ugh,...)

My husband, who, I think, fashions himself a great jolly old elf at this time of year, is working in conjunction with my daughter and together they have informed me that Christmas Music stays on until New Years Day.....She's particularly taken with  Oh Christmas Tree, by Andrea Bocelli. I've now heard it about 100 times.

So it was with some trepidation that I approached the Planetarium's  Laser Light Show Holiday Songs and Skies with Mr. Jack Frost today.   I swear to you, as I was getting ready to go, strains of Rockin' Around The Christmas Tree were wafting through the house.  I had reached my limit.

At least I thought I had. My real limit was reached when I got to the ticket booth and presented my membership card only to be told that the membership does not cover laser light shows and that this extravaganza was going to cost $25........Oh joy, $25 to listen to more Christmas music....

But then we went in. And the music started and so did the lights. And my daughter had a BLAST......She was way more excited that I would have imagined. I even enjoyed it. The music was beautiful (Except for that overplayed Mariah Carey song) as were the images and lasers. They also interspersed the show with  the current night sky and the constellations,stars & planets that you can see right now. Very neat. Completely worth the $25.

There was some stupid banter from the Jack Frost character but at least it was no Bing and Frank.....
Posted by Christine at 11:38 PM

I am voting with the Republican on this one. Christmas Music stays on until New Years Day.

When I first read this story i thought you were going to have to pay $25 a person, apparently not and I'm glad you made your girlie and hubby very happy.

BTW- You should have brought your iPod no one would have known!

I actually liked it too but I'm officially done with the Christmas tunes now.....And it was very loud, it's not like I could have listened to the iPod anyway. And also, Matchbox 20 or whatever would have been really horrible mixed with flying reindeer....