Today I went in the search of  that all allusive, Christmas toy.....

No, I did not wrestle someone in Walmart over one of those hamster things....

I meant to order this a while ago and never got around to it. Then when I went to purchase it no one had it.... I called all over and finally found it in an upscale toy store in Fairport. 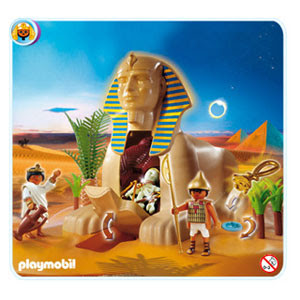 They have a pyramid which is bigger and even more cool than this.  That, is nowhere to be found. This one has a secret compartment you need to open with an amulet, a mummy with a glow-in-the-dark skeleton, those 2 guys and a few other things.

The funny thing is that my daughter has no idea this even exists. (it's not like I was chasing after it because she really wanted it!)  We've been reading about Ancient Egypt and she loves it so I know she'll really like this. And this is a toy I will like playing with too.

If you've never checked out the Playmobile toys you really should. They have all kinds of sets from Romans to Pony Ranches to Weddings to Masai Warriors. I kid you not!

I almost bought myself this little guy today because he was so darn cute! Being the practical woman that I am though, I left him on the shelf. 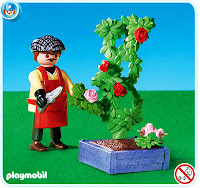 I'm also kind of cheating and using this as my December photo of the day!

OMG, I totally approve of this toy! I want to come over to your house and play with Emma...a playmobil sphinx!

I KNEW you would! I almost titled this Toys for Stephanie!!Really!