Roadside Finds In The Dark or Where I Have No Shame

This evening I had an appointment that ended around 8 pm. On my way home, I was driving down my favorite street.

Ok, so the appointment was nowhere near this street. I was "doing the ride" alone.... I do

that sometimes. Drive around with the music on....Look at the houses, think, sing out loud, loud..... So picture the following story happening to the tune of The Who's, "Behind Blue Eyes" (I'm kind of crushing on Roger Daltry despite the fact he's older than my dad, I'm talking circa 1977 Roger...Damn!)

Anyway, so there I am driving along, minding my own business, when I see a small couch, or rather, a settee, sitting on the side of the road. It's actually next to THIS HOUSE. I have no idea what it looks like because it's dark but it looks promising. So I stop the car and in my excitement, do not turn down the radio. And leave my door open. The street is dark and there I am, like a beacon, all in my haste to examine a possible treasure. And treasure it was! (or will be anyway.)

It's heavier and larger than it looks. I had my Explorer so at first I tried shoving it in the back seat. When that didn't work I decided to put the seats down and load it from the back. This would be fine except that I have a load of returnable bottles/cans back there that I have been procrastinating on returning.. So first I had to move those. While messing with the bottles some fall out of the Wegmans bag they are in and clatter all over the road..... Finally, I heave it into th 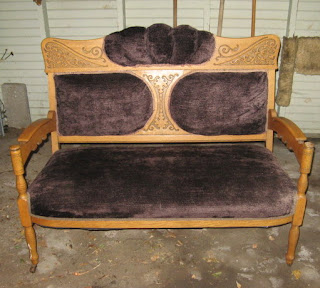 e back of the truck (Did I mention it was pretty cold out tonight?) and of course, the back door won't close. Ok, fine, I'll just drive slowly. I get in. turn down the raido and turn on the truck... Did I mention I need a muffler? It's not usually that bad because I can't actually hear it with the windows up (and music on) but with the back door open it sounded really LOUD....So there I am, once again, on the nicest street in my town, acting like total trash..... Not only do I look like Fred Sanford, I also sound like him... Really, if you see me in the halls at preschool I seem pretty normal...You really

would not suspect this latent love of other people's garbage. I bet I have a syndrome or something.....

I really like it. It will make a good winter project and needs only a small amount of repair to the back. (Michael??) I'm thinking that I'll either paint it white and upholster it with tan burlap or black and perhaps leopard print. I'm planning on putting it in my front hallway so I may go with the white.
Posted by Christine at 10:50 PM

You make ma laugh! I can picture this entire event because MINUS the muffler (which only makes me laugh harder) I have been there with you on the ride (on your old street of course) when you made me rescue your old plants. Still makes me laugh. Beautiful find though...only you! :)

Love this! So much potential. You ar elike me. I have no shame and love finding treasures...but Tom won't let me do it on Northfield...only on other streets and when he is not with me, LOL.

Thanks Leigh and Karley-It was probably better in the dark anyway. Not that I'm actually embarrassed about it in the light of course.

Now that it's seen the light of day I'm thinking I may just clean it up and do burlap on the seats, kind of a shabby country living look.

Too bad you were not with me Leigh, you could have helped me heft it into the truck and then we could have laughed ourselves silly after....

The setee has nice bones!

OMG I'm still laughing over this post especially picturing you singing loudly while cursing around.

I can't wait to see how the setee comes out. Enjoy.

I will enjoy it, after Michael fixes it.

He probably doesn't read these blog comments so you can tell him that. You know how on South Park they used to kill off Kenny (perhaps they still do, Is South Park still around) Anyway, Michael can be the Kenny of my blog. I won't kill him off or anything but I'll just mention him all the time. Like a mascot....Lets see....I think I can work him into posts about fixing things around my house, cheap vs frugal, maniacal laughter and beat up boat shoes.

And Kristin, I was cruising around, not cursing around. Although the idea of me driving around swearing my head off and finding furniture is also kind of funny.

It may only be 6am but the "cursing" around comment has me LOL! I am totally picturing it in between "sets" of Roger Daltry!
Thanks for the laughter Kristin and Chris!

Yes I know exactly what you mean about Kenny(yes South Park is still around it is a cable show after all) and I love the idea of working Michael into your blogs. OMG the boat shoes very funny!

Glad you and Leighanne got a good chuckle :) But we are talking about the woman that has no fear of throwing the finger so it is plausible that you would be cruising around cursing!

Touche Kristin! That was pretty funny.

Perhaps the image is one of me cruising around to The Who, flipping the bird at anyone who thinks they can get to the good garbage before I do!!!!