Just so people don't think my house is full of garbage after this post, I wanted to show everyone a piece that I finished this week, that I am particularly excited about!  All I really did was paint it, although I do think it was an inspired choice of trash picking genius when I found it. 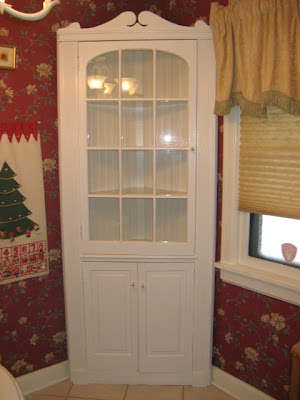 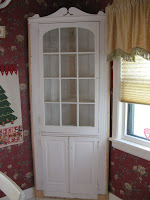 This cabinet was one of those corner built in cabinets that a lot of houses had in the 30's and 40's. I should have taken a picture of it when I first brought it home as it had no back. Just a skeleton frame in the back and shelves. I had Michael put beadboard in the back, reinforce the sides a little and make it a freestanding unit. I used beadboard because once that red wallpaper comes down from the kitchen someone is installing beadboard in this particular part of the kitchen. You can see in the picture the wood on each side and see how much more substantial the piece looks with that extra wood once I painted it.

For those of you not in the know, Michael is not my husband. Michael is my friend Kristin's husband. This week at Garden Club Kristin described him as Deanna's and my older brother. I described him as a huge pain-in-the-ass that I adore. (Yes, Michael, I do, in fact, like you. There, I've said it. Publicly even.)

Michael and I have a symbiotic relationship in that he likes doing things for people (even though he pretends this is not the case) and I like having things done for me. (Something I am not at all shy about) It all works out rather nicely I think. He has hung shelves, installed crown molding, fixed electrical outlets, ground stumps, helped me with a decorating dilemma involving the dining room chandelier and dropped off wood for the fireplace and as much free packing material as I need from the cabinets that he installs. (His custom kitchen work is to die for!) One unfortunate day he stopped over just as my neighbor was throwing out old doors and I made had him take the glass knobs off and install them in my house.

I did actually come by the work on this cabinet honestly, I sold a bunch of his tools on eBay for him in trade. The other stuff, not so much.

I think the materials for this project cost around $25. Add to that paint, (which was $23 but I hardly used any and I will be using it for the trim in the kitchen when I paint, and a $10 paint brush (I always use Purdy brushes when I paint. They are more expensive but so worth it. I don't buy a new one with each project mind you but I was in need of a new one anyway). New glass knobs were $5 each.

All in all, it was a pretty inexpensively piece of furniture, except for the fact that my debt to Michael is ever growing....
Posted by Christine at 10:37 PM

This looks great!! Older brother -- ok, I can see that! Michael's going to have to be on a break from you when I get him to build the fun carnival games for the preschool... (which his daughter attends, mind you!) Just warning you in advance! And I usually pay my debts to him in his favorite chocolate milk, pb & j on white bread, and chips! You just have to know the way into the man's heart! ;) Love ya, Mikey! (You're right, Chris -- he IS becoming the Kenny of your blog!)

Deanna, I don't have those things at my house.

Since the carnival games for school will also fit nicely into the category of things beneficial to me, I'll allow it....

I just usually make him a fresh pot of coffee....

He's going to love this you know, Deanna.

Oh, so lovely! Great job. I am picky about paintbrushes, too. It's like having good quality makeup brushes...your paint/makeup may be "the best" but if you're using bad quality brushes, it'll show.

1. That is gorgeous and I love it in the kitchen. Great job!

2. You made me laugh out loud, seriously out loud. You've got him pegged, although I once told him long ago that he's an open book, a 2nd grader's book!

3. I too don't have those items that Deanna mentioned in our home...

Great post I think Kenny, I mean Michael will be touched or at least crack a grin.

Oh come on, I can't imagine this won't warrant a tiny cackle out of him!

Yes you're right a cackle indeed but first he'll have to roll his eye!!

What a beautiful cabinet. I love it!

You were featured on the December Photo Project homepage last weekend. Thanks for joining the DPP!