This is my favorite entry yet! 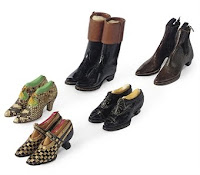 I stopped from work to see Alderman about          .  Over home to supper and helped Pa cement up cellar wall. More water was leaking through. In fooling, I kicked B's shoes under Ma's bed & she would not come home until after I went home in bed & got up & came up after her. She was in bed with Clara.

What is going on here I wonder? I'm a pretty feisty gal sometimes and I can tell you I've never had an argument which resulted in me sleeping elsewhere on account of someone hiding my shoes...At least I don't think I've had an argument that stupid but I probably have... Haven't we all?

But I'm left to wonder, is Bess terribly high maintenance? Is she so fragile that something like this sets her off so much so that she decides to sleep over his parent's house?  Really? Over shoes?

Has Adam been a total pain-in-the-butt all night long and the shoes were finally the last straw. She's got a bad cold (That she probably caught from Ma) and has probably been tending to Ma all day long (again) and now her clown of a husband has hidden her shoes under her sick mother-in-law's bed probably at the exact moment she wants to put them on and finally go to her own home. In aggravation she decides that yes, if he's going to hide her shoes so she can't leave then she darn well won't leave. He can go home alone.

Can you imagine this drama going on in front of the whole family? Ma and Pa and Clara and Raymond?

When I first read this, my impression was that Bess was kind of a baby about the whole thing. Now I'm not so sure.

I thought the same thing, but you bring up some good points. I think by the end of the journal, we will have a good enough sense of all of their personalities and will know the answer.

I think that Bess is stubborn, but in a good way. I think she does stuff that she would rather not be doing in her first year of marriage (really, who wants to take care of a sick mother-in-law - community centered time in society or not).
I think you are right - she has probably had enough at this point and said "To hell with it!" If it wasn't the shoes it would have been something else and good for her for putting that foot down, even though it was bare.

And I would love to see Bess's journal and see what she would have had to say about all this. Probably something along the lines of "I wish he would stop kidding around with me after I have had a long day. And cut it out with all the basketball, he's a married man for crying out loud! He's not 13!"

I know! All the entries are give just enough info to leave you wanting more LOL....

Meredith, that cracked me up!!!

Sweet Miss-I know. I want to be able to ask this guy some questions!!