St. Patrick's Day In The Garden

Today was a gorgeous day and we spent the afternoon in the garden. I'm pleased to report that we ate the first vegetables of the year! This is a record as far as I am concerned. Never before have I eaten anything as early as St Patrick's Day. Last year we didn't eat from the garden until May.
I'll be honest though, I planted turnips last summer and let some overwinter. This may make me a cheater at my own game.
Behold a mammoth turnip! 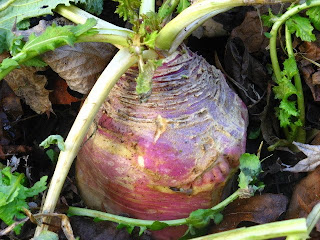 This thing is huge. (See the photo below for comparison). This guy is literally as big as a softball!  And probably heavier. Heck, I bet I could win a turnip growing contest with this. (At least one that was held in, say, my neighborhood...)
I like to think I'm a gardener.
Sometimes I'll say " I grew a large turnip." However, when I really think about it, I didn't grow it at all. I placed a seed in the ground and watered it. It grew all by itself. In truth, "A large turnip grew in my garden."  The only role I had was the placement of where it grew.
Sometimes you may have a greater hand in it than that, maybe spraying your tomato plants with water to knock off aphids or staking a pepper that's falling over from an overabundance of fruit.
But that makes you a maintenance man. A groundskeeper if you want to get fancy.
You can't grow a garden any more than you can grow a child or a dog. They grow on their own. 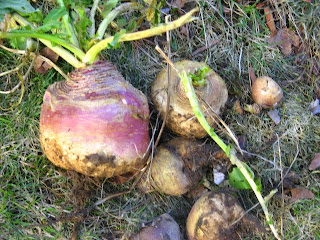 Mother Nature is the true Gardener.
I am just lucky enough to have some of her work at my house.
Posted by Christine at 10:30 PM

that is one HUGE turnip....about ready to plant this year and will be the first year I'm trying turnips....can't wait.....I love turnip mashed potatoes....YUMMMM

For me, turnips have been just about one of the easiest things to grow.

This is a lovely post and a lovely thought -- nice of you to give Mother Nature her due! ;)