The Dark Side of Trash picking

Since I've already chronicled some of my less-than-fine moments of trash picking here and here you might be under the impression that I have stopped looking at random strangers garbage piles with a critical eye. You would, in fact, be wrong.

However, sometimes you get more than you bargained for.

Yesterday I was driving home with my daughter in the car when I spotted a lovely red painted cabinet and a black shelf. I screeched my breaks and stopped. While I was perusing the pile a nice woman came out and I politely asked if she was getting rid of said items (see, I have learned....) anyway, she was. She had  just closed down her garage sale. She said I was welcome to the stuff and the she would get her son because the cabinet was heavy.

As her son and I were loading the cabinet into the truck, her husband pulled into the driveway. Momentarily distracted by this, part of the cabinet slammed on my finger. Really. Hard. So hard that I believe I looked on the ground to see if part of it was laying there. It was not. However, I was bleeding. A lot. And my daughter was there so I was trying not to alarm her. Tears were pooling in my eyes but I kept smiling and holding my finger. 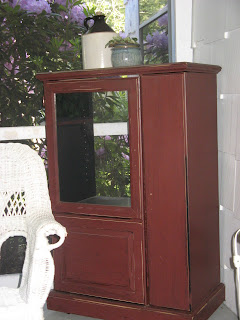 Her husband came over and I saw that he was a policeman. I also saw that he was putting on plastic gloves as he approached.  Yes, I looked that bad. He didn't touch me at all, I think the gloves were just in case he had to.... The wife asked if I would like a bandage. What I really would have liked was to leave but I really needed to stop the bleeding. The son, sensing his job was done, ran off so as not to contract anything from me.   The wife came out with a large band-aid and helped me put it on (without gloves, she must be braver than her husband) The whole time I think I was seeing stars and assuring my daughter that I was "just fine." When that was over the woman gave me some religious material.  To be fair, I may have looked ripe for a conversion, what with my mortal finger wound and all... I thanked her for my cabinet, the bandage, my religious conversion kit and for praying for me.... They really were a very nice family and were nothing but friendly.

However, that is the most trouble I've ever had trash picking and my finger still hurts to prove it.

The cabinet does look nice on my side porch though. It has a shelf I still need to put in it and I may put some vintage lemonade glasses in it for summer so that we look like people who drink lemonade on the porch in the summertime.
Posted by Christine at 11:50 PM

I needed the laugh this morning. I often see things at the curb and thing I could do something with that, but I have promised myself I will not until I have taken care of all the clutter I currently have, and have a place to store the item until I make it mine ;)

Oh I love curb shopping!! I have a few items though that I have been meaning to do something with that I just have not gotten around to yet that I should probably place at my own curb!

Ouch! I smashed my finger getting a grill in to my car once 15 years ago and I have never forgotten it. Man did that hurt.

I really like that cabinet and may have shed some blood for it, too.

LOL! I am sorry. Poor you! I am glad you found that cabinet, but WOW--you poor thing!

Um I don't think I would consider that a freebee but id does look nice! Oh and OUCH!