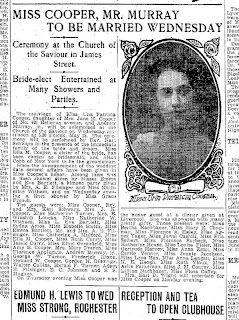 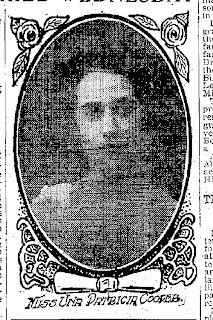 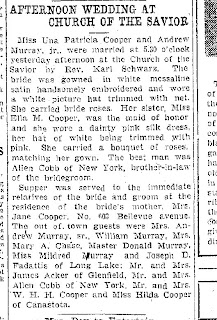 ;';';
May 18, 1910
Up at 4 am but could not see the comet. Una Cooper married Audrey Murray. We (the earth) passed through the tail of Halley's comet but nothing was visible. Nearly everybody up all night. All the Coopers were up to our house.


W. Clean Full Moon.
R. 1AM
Gertie stayed with us.


Oh can't you just picture it all!  Everyone up all night after the wedding reveling and looking for the comet on the porch. (He does have a porch, remember?)

I think that the fact they got married as the earth passed through the comet is momentous.  There was actually a lot of hysteria surrounding the comet in 1910 because the earth was to pass through it and because comets contain poisonous gas. Therefore there were a lot of people running around scared of the comet. (More on that another day)  Perhaps Una and Audrey were thumbing their nose at it, daring the comet to ruin their day. Or perhaps that is when their pastor was free....We may never know.

Gertie is related to Adam as I'm assuming that she's the Gertie Filsinger from Philadelphia listed in the address section of his book. I really think they must be related to the Coopers somehow. I feel a full blown family tree coming on people... I really do.

And it looks like I'm not the only one who noticed how many showers Una had. I like how the subtitle on the first article reads "Bride Elect entertained at many showers and parties." That made me chuckle because I was thinking she had been to quite a few well before I found the article!  They even talk about the kimono shower! And there is Bess, listed as Mrs A.E. Filsinger! It's hard to read but if you click on the pictures they will get bigger.

All of the information was published in The Post Standard in Syracuse.

I think it's pretty fortuitous that I found a diary whose participants have actually done things that have been mentioned in the paper.  I could have found a diary whose participants are impossible to trace. These people are all right there. And I'm not even looking that hard. Una's wedding was the first time that I searched for someone besides Adam and Bess. It clicked with me that possibly a wedding would be mentioned somewhere! Love it. Now I feel like I should check on everyone and anyone mentioned in this.

I know a bunch more about Adam and Bess, even things that happened after 1910. And while I can't wait to share it with you, you'll have to be patient!!
Posted by Christine at 12:14 AM

I am enjoying the Bess and Adam soap opera! This stuff is so interesting to me! I think it would be great to get a full tree going, even if it is just for fun. And to see them mentioned in the paper from time to time makes it all the more real. Thanks for sharing!

You're welcome! Obviously I'm enjoying it too!!! It's like a very rewarding treasure hunt!