Tonight we went to Dinner With Santa at the school where my husand teaches. 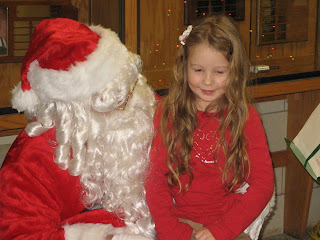 These are the only photos that I have of her on Santa's Lap. I mean ever, not just tonight. Historically she has been terrified of him and tells me she's "Going to let Santa Surprise Me" just so she doesn't have to go and talk to him. 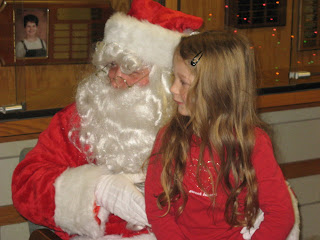 All she told him that she wanted was a Zu Zu Pet and a Barbie....Guess what? Santa didin't buy either of those things this year! I guess Santa still needs a few things. 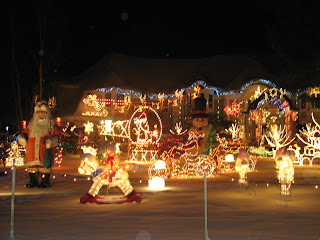 After, we went to Starbucks, got some coffees and a kids hot cocoa and went crusing for Chistmas lights. This was one of those houses. It was the biggest one I've ever seen. It's also a really huge house. Look at the gigantic santa in the left hand side of the picture!!!! 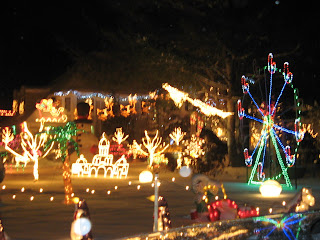 These pictures don't do it justice. This display was incredible with all kinds of lights and statues and nativity and santa... It was so fun and crazy. You can't believe the traffic on this street either. While we were there a bus full of old people drove on by. The street ends a few houses down in a circle. I'm sure the neighbors were thrilled. 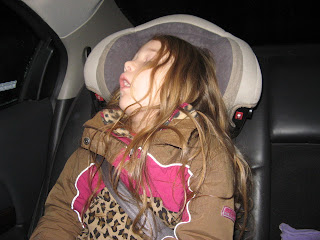 Labels: About me, Family

Oh how fun! I still don't have a picture of Ben with Santa. He will not sit on his lap at the mall--same with the Easter Bunny. Ben says they are both "scary".

Emma's hair is getting long. It's stunning!

The Easter bunny IS scary. And usually not fat so there is this bony bunny with a big head... I get that!

Thanks-She doesn't want to cut it. I think she would look darling in a cute bob but for now it's a no-go. In the movie Tangled they do up her hair with 2 braids on the side that meet into one long one in the back. Then they have all of these flowers woven into that. We have a bunch of bows and flower clips so I told her I would do it like that for her when I have some time-Probably for Christmas.