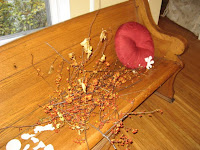 Is it illegal to cut foliage down from a public park in the town that you live in and pay taxes in? What about if it was something that will grow back? What if it is actually a highly invasive species. What if you found it chocking a tree? Is it still morally wrong??? 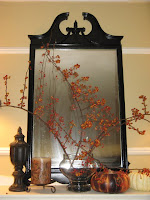 I love decorating with natural elements. Last year, after Thanksgiving, I noticed that a local park had an abundance of Bittersweet through one part that I drive through. Have you ever purchased this stuff for decorating? It's like $5 for a little bouquet. Then it sheds and you have to toss it out.

Anyway, I vowed to remember where it was so I could use it for Thanksgiving decorating this year. I was not sure if it was the harmless American Bittersweet or the invasive Oriental Bittersweet. I assumed it was the latter because it was covering other trees and I was right. 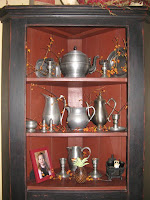 So I cut a bunch down (I'll be honest, I didn't just cut it down because it was the bad kind, I would have cut it down if it was the other kind as well-It IS a perennial) and had enough to put in a few different places around the house.

As for disposal, I'm up in the air. I would usually throw something like this in the compost pile but I'm afraid of it seeding and messing up my woods. I'll probably toss it out in the garbage instead. 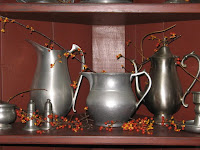 Thanks! I wasn't sure if you had seen it black or not.