Thoughts About The Library 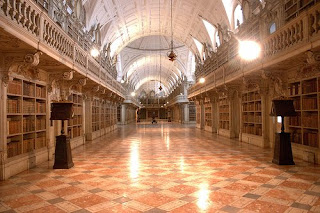 Today at the library (the library, Jacquie, is that place where they let you take home books and movies for free.) I saw an older white haired man looking intently at the books in the romance section. I watched while he read the backs and then decided weather or not to put them in his bag. He had a big pile.

It was a bizarre scene to me. I imagined him looking for a new tale of a Vicount and his scullery maid having forbidden trysts in dark stairwells.

And by the way, how come nobility in Romance novels are frequently Vicounts? Who uses that word? I don't think I've ever been with another person who referred to a Vicount. And why are so many romance novels set in Regency England? I mean really, don't those people smell? (especially the scullery maid.) I lived in that time period (albeit it on the prairie) and I'll tell you, I would have been hard pressed to find someone willing to meet me in a dark corner.

I myself am more of a murder mystery fan when I need a light read (which explains my fear of killers) And I sometimes wonder what it says about me that I would rather someone murdered than living happily ever after?!?!?!

I have often said that the greatest gift that my mother has ever given to me was my love of reading. I once told her that and she looked at me strangely, perhaps thinking she's given me a heck of a lot more than that.

But reading makes me who I am. For me, the library is full of possibility. My own pure unbridled possibility.
Posted by Christine at 11:47 PM

I love this post. And being a romance author, of course I would. But look at that beautiful picture of the library! I could live there.

Anyway, re: Regency Romances. I love historical romances, and kind of put out of my mind the smells and dirt because it would have been perfectly normal to them I'm guessing...and years from now someone is going to look back upon us and be like 'filthy barbarians!'

But the Regency period is all the rage. Still. It's not my favorite period to read about but the rules are so well established that authors can now write in it without getting too much wrong. It's a comfort zone now. And a little bit of a fetish.

I think they use Viscounts b/c it's hard to believe that there were so many Dukes in the peerage, but there were a bunch of Viscounts, so why not? :P

Great post. I agree. As we discussed over coffee, the variety is such fun. I have books about baseball, decorating, and autobiographies on my shelf of library books, with magazines on both fashion and vegetarian cooking thrown into the mix.

By the way, why didn't you post a pic of our Cooper Road library? Just kidding!

The library is at some estate or other-At one time, someone's personal library-I could live there too!

I suppose if I were a Regency Romance fan I would be beside my self with the choices.

And the smell, I suppose you are right, I just can't get over it. Really, 2 days beside the hearth and I smelled like a camp fire and had soot in my ears & nose (and really, much worse than that!) Besides, I worked so hard I was WAY too tired to be meeting in a dark stairwell. It's messed with my suspension of disbelief in regard to historical romance....