So after posting a completely self serving little ditty about my college roommate Jen, I announced that I would gladly post another missive about anyone else pledging to read my blog faithfully.

Who should request this service but my first high school boyfriend Paul. (I guess we all know the narcissists in my life now don't we) He also wants a Christmas card this year.

So here goes. Paul was my HS boyfriend. He was the first boy I ever kissed. He looked like George Michael in Highschool, complete with stubble. He was the only boy I knew who had 5 o'clock shadow by 8th period math class.... He was a Morman (he even went on a mission to China) but isn't any longer. I went to his house on Christmas and brought chocolates for his mom as a suggestion from 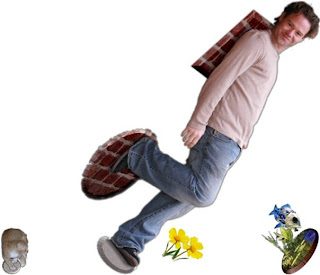 my own mother. (Yeah thanks a bunch mom, Mormons don't EAT CHOCOLATE) How were we to know, It was like 1987 and we only knew Catholics......

Paul moved away when we were Juniors in high school. I went to visit him once in Philadelphia where we snuck out of his parents house late one night, went to the train station where we had been the day prior and stole these huge advertising posters. (I also think Mormons probably don't steal so I think he was already off the path) I also snuck out of my own parents house a few times to see him before he moved. (I was such a good girl that I left my parents a note though....Who does that???) He was really funny & dramatic and drove me to Canada once where we were stopped by the authorities because we had snuck (apparently there was a lot of sneaking with that boy) in a foreign exchange student whose passport we didn't get stamped and also did not have keys to the trunk. It was sheer luck, I think, that I am not still rotting in a dirty Canadian jail cell somewhere.

He lives in CA now with his lovely wife and son and looks strikingly similar to how he looked in high school. Except last year he cut his finger off so I expect his hand looks different.

Any more takers......I probably only have 2 readers left anyway. But a deal is a deal.

ps- Just so you know, I didn't crop his photo like that and add kitty cats and flowers. I stole it from his facebook page...
Posted by Christine at 10:59 PM

Someone else beat you to that, you can be next after them though....

Yes, that was fantastic. I did not know i was the first boy you ever kissed! You poor thing. George Micheal was cool back then but you are very brave to bring it up now. I also didn't know that mormons didn't eat chocolate. Oh well, I'm sure my Mom ate the chocolates anyway. BTW I took you to Canada more than once. I don't blame you for trying to forget. Thanks for the post. It's nice to be remembered!

Yes, sad but true, you were the first boy I ever REALLY kissed. And I was certainly not going to admit it at the time!

And I know you took me to Canada more than once but it was only that time that we almost got arrested.

LOL.
That was funny, Christine! I enjoyed reading :)

Ah the old days, not that I was apart of it but very funny stuff.