Today was my girlie's 1st day of pre-school! She was so excited this morning and got all ready with her backpack. Parents stayed today to see what it was all about as well as ease the children (and parents, I suspect) into the whole routine. Next week will be a real test for me when I have to leave her!

She had a great time, played with the kids, had a snack, listened to the teacher and wants to go back! It was all much easier than I had imagined it would be. She's also the oldest/biggest in the class so she's feeling kind of confident. (Not that, that has been an issue!) 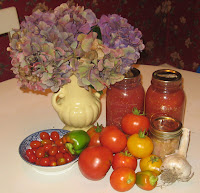 After that we went to Great Grandma Ruth's and Bob's house where we had lunch and got a bounty of food. Dried Hydrangea for my living room, tomatoes, garlic, pepper and some tuna that my aunt who lives in the Pacific Northwest canned and sent. I have a wonderful tuna pasta that I will make with that. I also got 2 of the 72 JARS OF TOMATOES that my grandma had in her basement. Every year she cans tomatoes. A lot of tomatoes. She can't possibly eat that many so I agree to help her out. ;-)

She doesn't need to can them anymore. She used to grow her own food and can it because it saved her money. It helped her and my grandfather survive when money was tight. Now I think it's habit and a need not to waste anything that comes from the garden. This got me thinking about the fact that although I love to can things, I do it for the thrill of it. Saving money is secondary (nice as it is) I don't have to can. I don't do it every year. Most of us don't ever have to can. Most of us aren't putting things in the larder for the winter. Part of that makes me happy and part of that makes me sad. How many people have never preserved food this way before? How many people know how anymore? Sometimes the things that make our life easier also make them flatter, less interesting, less satisfying. Opening a can of tomatoes from Wegman's is not nearly as satisfying as hearing that pop when you remove the seal on a jar of canned homegrown tomatoes.

My grandma is also REALLY STRICT about getting her jars and rings back so this is even a boon for the environment, except for the metal seal, home canned foods generate no waste!
Posted by Christine at 2:32 PM