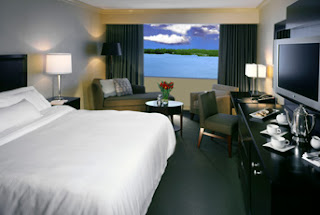 I swore off Priceline.com the time that I arrived in Bilioxi Mississippi at 11:50 PM on the day I requested travel.

However, this week, I have changed my mind. We went to Toronto with my In-Laws to see a Yankee game (well, ok, Blue Jays game where the Yankees were the visiting team) A friend of my husband told him he should look at Priceline for a Hotel, we had only used them for plane tickets to this point. He went on, asked for a 4 star hotel near the stadium and for $85 American, we got a great room at The Westin Harbour Castle. (Last year for the same trip we stayed in a so so Days Inn for $125 American. ) The rooms were great. Decorations, sleek and very "Toronto" The water view was beautiful and I swear, the bed was even nicer and more comfortable than the one I slept in at The Waldorf Astoria in NYC!

The seats were great and purchased, courtesy of my in-laws, on eBay for less than the best seats the box office had left at the time the reservations were made.

Dinner, also courtesy of my in-laws (Frugal tip-Have nice In-Laws!) was at Wayne Gretzky's restaraunt. Interesting even if you aren't a huge fan of The Great One. There is a very neat mini museum in the back where you can see all kinds of Gretzky memorabilia.

The most un-frugal thing about the whole trip was eating at the darn stadium. Prices were high ($3.70 for a bottle of water!) Since the exchange isn't that great at the moment, eating there cost 2 of us the same as one of the actual tickets to the game and we didn't eat all that m

It was about 100 degrees. The Yankees won. Mariano Rivera was an amazing closing pitcher and look! Derek Jeter is so happy to see me he's waving to me with his glove on ;-)
II
Posted by Christine at 11:17 PM