This past spring I started a different blog to journal my garden this year. I was pretty unsuccessful at keeping it updated (The blog, not the garden!) and found I spent more time out there working in it or watering it or just enjoying my morning coffee in it, than I did writing about it.

Suffice to say, while the blog was unsuccessful, the garden had a great year! I'm just going to merge those few posts into this blog I think.

Most mornings I would go out with my bowl and come back with a harvest like this one. It's a good thing my girlie can eat these tomatoes almost as fast as I can pick them! They never last long. Sometimes she picks them right off the vine and eats them-I feel like a good momma then.

And yes, I do always pick into this wooden bowl. It makes me feel earthy. 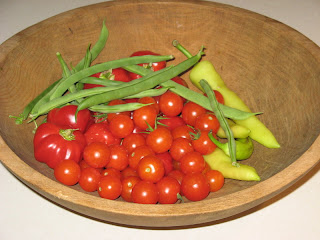 Look at all that green! It's hard to tell what is what. That big tower in the middle is a bean tee pee and boy have we had beans. I planted lettuce at the base and we enjoyed a lot of salads in early summer. The green mass in the front right is 9 tomato plants. See the deer fence? Worked like a charm and it really isn't all that obtrusive. 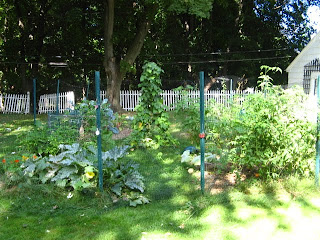 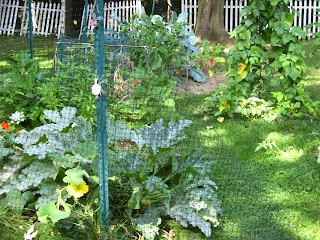 Heirloom tomatoes. Aren't they pretty? They turn the loveliest shade of pink which I will share with you another time. The name is Old German. Who knew Germans even had tomatoes? My mom's family is German and she doesn't make one single German recipe with tomatoes. Is it even warm enough in Germany in the summer to grown nice tomatoes???? I must Google this... 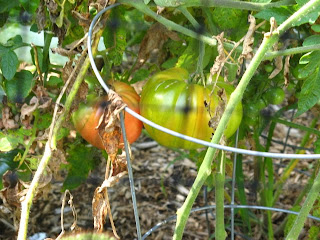 Peppers, eggplant, part of my pea trellis. I grew an Heirloom called British Wonder Peas. They were true to their name and produced until the 1st week in August. 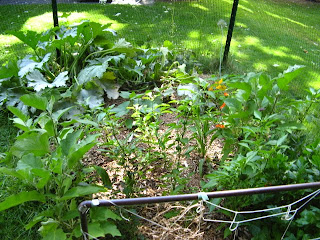 Ah my pride and joy this year. I know it doesn't look like much! But what it is is a HUGE LEEK and Potato garden. I love love love leeks and I'm going to have them WELL into the winter. It's hard to see the potatoes. This is the first time I have grown potatoes and they were SUCH a gratifying plant to grow. They get big, fast, sprout very pretty flowers and it is SO SATISFYING to dig them up. I grew a French fingerling called La Ratte. These potatoes were the BEST POTATOES ever. So tasty. All I have ever done is roast them with Olive Oil and Salt and they are divine!! (Once I threw in a leek but it was unnecessary) I only ever dig what I need for the meal and feel like a real gourmet when I do. Next year I'm planting twice as many. If you are lucky I will invite you over to share some. 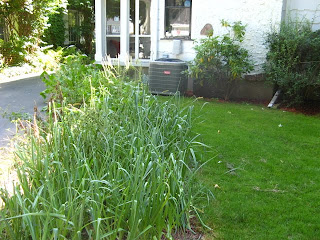 I'm also getting a bumper crop of herbs this year and have been making and freezing a lot of pesto. My turnips are popping out the ground and my horseradish is taller than my 4 year old. I'm growing nice celery which I fear will all be ready at the same time (and really, who needs 6 celery heads at once?)

There are only 4 butternut squash and we've had a nice steady crop of cucumbers, not enough to make pickles though.

On the down side my broccoli did not produce at all. I choose a variety called "Romanesco" which is an Italian strain. Not unlike the German tomato question above one should wonder (If you've ever grown broccoli) How on earth Italians grown Broccoli. Is it really cold enough?-Answer is NO-This broccoli (which is a normally a cool weather crop) needs sustained 80 degree and above temps. (I didn't know this at the time!) Since this was a pretty cool summer, it never happened. My radishes and spinach never really took off and my strawberries were all eaten by squirrels.

All in all though, this has been my most productive garden ever!
Posted by Christine at 11:37 PM

My garden didn't go well. While my strawberries came out in June AND late August, I ate a total of 4--the chipmunks and squirrels ate the rest.

My yellow squash and zucchini got huge--the leaves, at least, and the veggies never came to fruition.

I had a successful tomato crop at least :)

I was actually having trouble with the zucchini first. They would flower and the zucchini would fall off. Apparently they were not getting pollinated so when the flowers opened I pollinated by hand. That seemed to do it.

I would use that bowl, too.

I miss my garden. The best I was able to do was herbs on the balcony this year. :o(