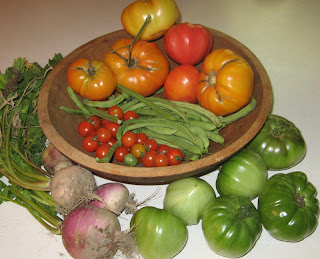 This is my Saturday morning garden harvest.

Saturday night I went to a Southern Themed Dinner Party and my course to bring was the appetizer. So I brought Fried Green Tomatoes with Cayenne Buttermilk Ranch Dressing from the Dinosaur BBQ Cook 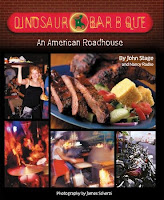 Small aside, this cookbook ROCKS! I can't tell you how dirty this book is from all of the things we've made from it. The worst (for you) of which would have to be the Shepard's Pie topped with MACARONI & CHEESE. Could you just die?!?!? I don't think I've made anything in this book that I don't love.

Anyway, the tomatoes. I had never had Fried Green Tomatoes before and most of the dinner guests had not either. They were FABULOUS! They didn't even taste like tomatoes. Kind of like fried tart vegetables... I can't think of any other way to describe them. The Panko crumbs gave them just the right crunch and the dressing was so good! Everyone liked them, even my non-tomato eating friend whom I made try them. At this time of year Green Tomatoes can be found in any home garden (and I've even seen them at the Farmers' Market). You should try these-they were super easy too!

I recently read an article about Fried Green Tomatoes and the author wondered why Fried Green Tomatoes are a southern invention, given that tomatoes grow quite well in the south. He imagined that the North, with it's shorter growing season would need to be the ones to figure out what to do with all their green produce before a frost.

My guess is that only a Southerner would try and fry a tomato.... This dinner party was a regular fry fest with my course, Fried chicken and FRIED PICKLES. (These were surprisingly yummy!)

And in true Frugalista Fashion, I stole magazines from the Hosts recycle bin on my way out.
Posted by Christine at 11:43 PM

My guess is because down here they will fry ANYTHING (even the parts of an animal that we northerners know better than to eat!) and because tomatoes grow so well down here that there are always multi-stages of tomatoes. I can still get starters at the store.

Yum. I first had Fried Green Tomatoes at a restaurant in Charleston back in 2000. They were delicious!

When me moved down to Savannah, they could be found in many restaurants--I really adored them!

Speaking of fried pickles--Sticky Lips has them...I sometimes will order one when we go for BBQ :)

I need to try Sticky Lips. My friend who was at the dinner told me she had Fried Green Tomatoes there as well. Up to this point I have been strictly a Dinosaur BBQ gal.

The pickles were good!