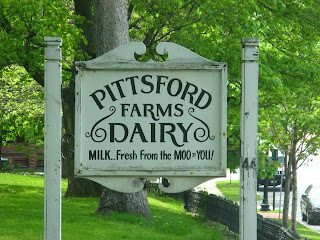 I have been wanting to try local milk for a while now and today was the day. After a meeting this morning, I went to the only local dairy in my city, The Pittsford Farms Dairy.

The Dairy is a small and has been in operation under two families since 1888. It not only carries milk, but a variety of local products including baked goods, eggs, ice cream, coffee from a local roaster and homemade pasta.

In December, Pittsford farms makes a SERIOUS egg nog sold in local stores. Fortunately it is rather expensive, thus I consume much less than I would otherwise.

I could not wait to get the milk home and try it out of the glass bottles. ($1 each,the first time you get the milk.) It tasted very fresh and sweet actually. The reason behind the sweetness is that generally, milk is pasteurized at 170 to 180, in pipes, for 16 seconds. Pittsford Farms pasteurizes in vats at a much lower temperature (145), for much longer (30 minutes). It's like slow-cooking using indirect heat. The milk tastes different due to caramelization of sugars.

I purchased a half gallon of half and half along with 2 gallons of milk and one dozen local organic eggs. Prices for everything came to a mere $3 more than if I bought them from the grocery store. (not including the $2 for the bottles!)

$3 extra for great quality and to support local food is a deal in my book! It would be cost prohibitive for me to drive there each week just for milk (Hence why I bought 2 gallons and so much half and half!) However, I do find myself out that way once or twice a month and plan to utilize those trips to replace some of the milk/eggs that I buy from the grocery store. 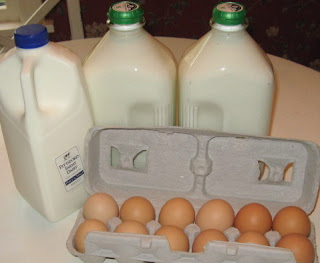 Posted by Christine at 2:40 PM

I love the idea of supporting local farms. Do you know what their farming practices are? I prefer organic milk.

Yup! These guys are all organic! AND cheaper than the grocery stores around here for Organic Milk! It's a Win/Win!!