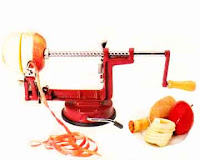 Ok, don't worry, I'm not going to post each time I don't buy something.

Yesterday, Jan 7th my willpower was tested! Last fall when I bought a lot of apples I called everyone I know to try and borrow one of these! No one had one. Wegman's had one but it was $25 and I didn't even spend that much on the apples.

And as I recall, since I had one of those apple slicer things, that it really wasn't all that difficult to peel the apples for pies and apple bread. A lot of the time I used them, I left the peel on which is better for you anyway. Since I don't think I'm going to mass produce apple pies I think I really don't need this gizmo anyway. Sometimes when you really think of what you need, you realize you don't need anything at all.
Posted by Christine at 2:12 PM

I had one of the Pampered Chef peelers (thrift store) and tried to use it when we canned apples /applesauce. It ended up being easier to use a knife. If the apple isn't perfectly round, it ends up skipping.

I usually leave the peel on too.

Oh that is good to know! Now I won't stew a minute more over this!

My husband pines for this. He told me that he loved apples, so I kept buying them and he'd let them rot. Then he told me that he'd only eat them if I cored and peeled them like his mother did. The look I gave him is not PG-13.

Last summer, I bought him an apple slicer from Bed Bath and Beyond that you slam down on the apple. It was eight bucks. Now that I see you found one that cores and peels for twelve bucks, I'm kind of miffed at my purchase.

Only if you core and peel it like his mom! That made me laugh out loud!!! For goodness sake!

The one that cores it is the one that I have (but I got it free from my mom!)