What's Growing In The Garden-Horseradish 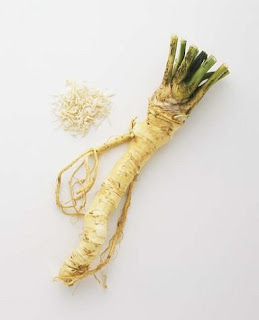 When I planted it my grandma told me that I probably never needed to plan it again! That ever if i dug it up, that it would probably come back. She was right.

Over the weekend I was planting and there was some horseradish growing somewhere where I swore I had dug it up last fall. In fact, I know I did. But there it was. And I wanted to plant something there.

So I dug it up again.

I made horseradish mashed potatoes with some of my garden potatoes that I still have in the refrigerator but I've already made those before. They were delish and horseradish isn't nearly so pungent grated as it is when you buy it in a jar with vinegar.

I also made a horseradish dressing that we used with grilled steaks. So simple and so good. And I've never used horseradish in that manner before. It was surprisingly good. I don't often use horseradish but after the potatoes and this dressing I think I may re-think this a little.

Mix everything together well and the dressing is ready to use on salads, eggs, potatoes, roast beef, and thinly sliced raw tuna or trout. The dressing will keep for a week or so in the refrigerator but is at its most potent when first made.

In other food related news, we used the leftover sauce from this chicken with sauteed asparagus, mushrooms & shrimp over pasta for a nice mother's day dinner.
Posted by Christine at 11:17 PM