This past Monday, on the Facebook page of the Rochester Museum & Science Center, they asked:

Heck no, I didn't know that! And in our household these days, he's called General Washington BTW....
At any rate I didn't know it. And given our recent foray into the Revolutionary War, I thought how neat it would be to take my girl there to see it soI asked if it was on display. It is not.

They told me that I could come by their library and ask to see it and they would be happy to show it to me.

So I did! I called and made an appointment and today my girl and I went to see what we could see about the George Washington letter.

The librarian, Lea, was a wonderfully kind woman who not only had the letter out and waiting for us, she spent a great deal of time talking to us about it. The letter is dated August 1776 and it's contents are regarding the Stockbridge Indians desire to join the patriots. The libriarian had also taken out a book so she could show us a passage about the same thing! Seriously!!!!

You can read the text of the letter here if you are interested. 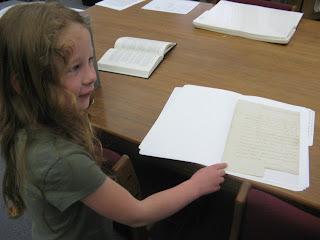 The libriarian wore gloves so she didn't get anything on it, but she let us TOUCH THE LETTER (twice actually) ....The paper is made of rags so it felt a little different. However, that was not the big deal. The big deal was that WE WERE TOUCHING SOMETHING GEORGE WASHINGTON ONCE HELD IN HIS HANDS!!!
As you know from my Laura Ingalls Wilder letter, this kind of thing is pretty thrilling to me.... REALLY THRILLING actually.
My girl was feeling very shy and nervous about touching it. I told her she better do this because she's probably not going to get the chance to do this again...Probably ever.... 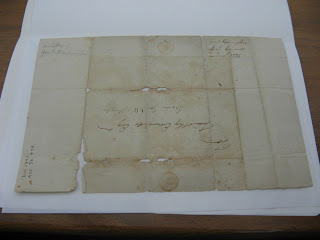 The envelope. Where he wrote his name, General Washington..... OMG! 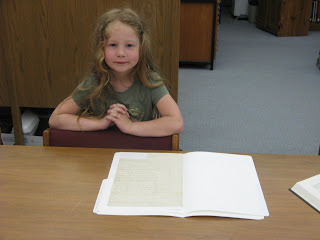 She was feeling a little overwhelmed. She didn't really want her pic taken but I told her she's probably love it for the rest of her life. Apparently that convinced her.
Later we ran into my friend Sara who works in collections and her boss, Dr McIntosh who is the Director Of Collections. They gave us a little behind the scenes tour where we saw a ton of neat things, including: 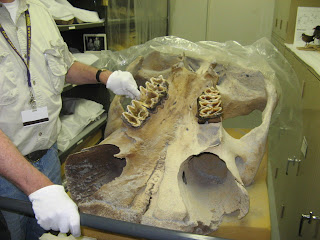 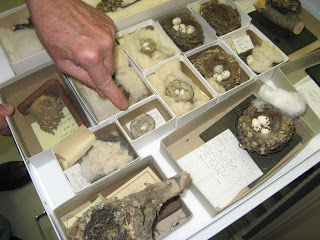 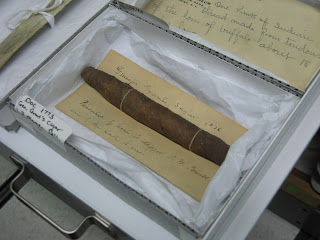 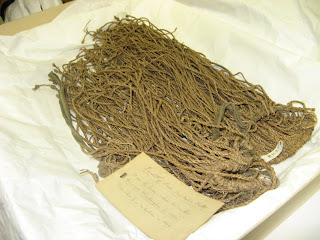 A piece of an outfit worn by Red Jacket WHEN he met with George Washington after the Revolutionary War ended....
Afterwards we enjoyed thier beautiful garden. 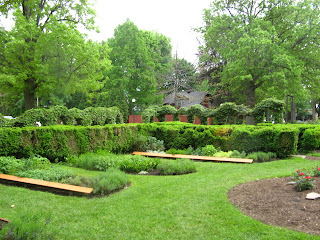 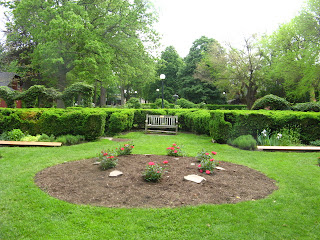 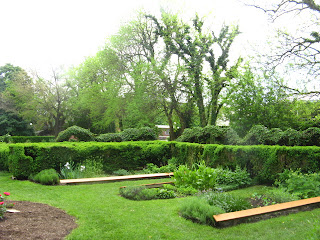 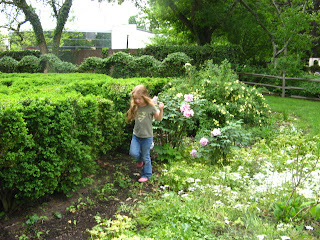 It was a pretty wonderful afteroon and I can't help but be thankful that we live in a world where every day people have access to things like this. All I did was ask nicely and pay my admission. That my 6 year old girl could see and touch a tiny little piece of our country's history was an experience one can't have everywhere in the world.
We're not special. We're not rich. We're not famous or notable in anyway. And yet, there we sat next to Washington's letter. Museums in general are important for this very reason, and we are lucky indeed!
Posted by Christine at 12:16 AM

Labels: About me, Family Outings, Museums

This is AMAZING! I'm so jealous. WHINE WHINE WHINE. I want to go with you and Emma on these little trips. You know I would love them just as much as you do.

The General isn't my favorite founding father, but I might have peed myself to put my hands on that piece of paper!

What a wonderful experience.

I know you would!!! You would be so much fun to have along!!! Not to worry, I have a feelings we'll see more museums together in our lifetime!!

It's hard to beat Thomas Jefferson-His interest in plants and gardening alone makes me swoony.....

I couldn't believe she let us touch it. I *was* super excited. Emma thought it was neat but I know she doesn't fully understand how AWESOME it was.

And the Mastadon head was really neat too.