Lily Dale Visit With A Medium 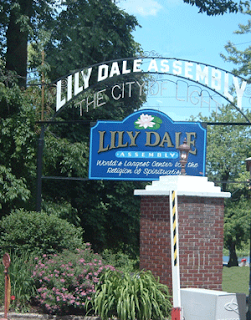 This past Saturday I went to Lily Dale with Deanna and Karen for a session with a medium.

Lily Dale is a small community of mediums, right outside of Fredonia NY, where I went to college. Deanna and I had gone to this medium in college and our friend Leighanne also went recently. In college, Deanna's reading was particularly accurate. I also remember some accuracies in my own.

It was a beautiful sunny day and we sat by the lake as one of us was having our sessions. Karen kept us laughing the whole day. There was coffee (That, OH MY GOD college friends of mine, I got in the BOTTOM OF CRANSTON HALL. There was a Starbucks there. Yes, right in Cranston...Right where we would swipe our meal card before heading up the stairs.) That was later in the trip though.

I'm not sure where I stand on the whole medium thing. I tried to reason out some things with myself but I will say that there were some things she go so very clearly and some rather personal things I'm not posting that were also very spot on. I have no explanation for this otherwise.

Things of note from my reading.

-My grandmother is with me quite often (which is a nice wonderful thought for me) and with her husband Joe/Joseph (This IS my grandfather. She hit this right on the nose. No hesitation in the name and it was the first thing she said.) It was strange. She's also wearing curlers and a hair net at one point....(Which she did actually do) Many nice grandma messages. Like big hugs.

-I have a green aura

-I have an analytic mind (which I do.)

-Some promising job news. (which would really make me happy)

-I'm going to have a long career, a nice paycheck and a good retirement. This makes me happy on two levels, 1) That I will, in fact, have a career again. 2) That I will live until I am old enough to retire.

-My daughter has curly hair (while I have straight) is smart, and is going to be good with men. That's weird to tell me isn't it? Do I need that info? Guess I better get ready for that one....She said the words Femme Fatale. (in a good way she said. Is there a good way to be one of those?) That freaks me out a little....

-I'm moving south sometime down the road even though I would have never have guessed this and don't really want to?!?!? Possibly for a few years.....hmmmm.....

-More babies around me....(la la la (fingers in ears) la la la.) Um No. Really, no....I'm preferring to think of these as someone else's babies that I really like a lot. I think she was probably confused because I was wearing my photofinish primer and looked younger than I am....

-A small surgical procedure..... Yikes, I don't like the sound of that. I should be fine though in case you are worried.

-The best one was that my grandmother was laughing about The Statue Of Liberty. This one was really weird to me because my daughter often pretends to be the Statue Of Liberty and it cracks us all up (especially the grandparents).

-Interesting stuff about my brother.

-My spirit guides kept saying "You write the book...." She said she's never gotten that message before. I don't know if this means I'm writing my own story as there was a lot of mention to me about my own free will or that I need to write a book.

How interesting, Christine!
I would love to go there and meet her sometime to hear what she has to say.

First of all, I'm so jealous. I wish I had gone with you! Secondly, although I'm not sure where I stand on the whole medium business, a few things about your reading jump out at me.

1. You are taking a fun trip soon. I think she must mean that you're coming to visit me.

2. You're going to move down south. Maryland is south. At least, it's more south than Rochester!

3. The Femme Fatale...it sounds like Emma will finally master the fine art of "The Cool Blonde"

OMG! I know for SURE that she means you guys will be moving to NC! It HAS to mean that (I never thought that I would live the rest of my life being away from you, so it HAS to mean that!) And the whole baby comment means we will be pregnant TOGETHER when you move down here! (And, you will probably be moving because of your new CAREER that will be in the south!) So far, I am loving your medium.......

I think you have my medium confused with someone else's Jacquie....

Yeah, I won't even let you move to WEBSTER, so I would never authorize a move down South... Sorry!

Do you remember the name of the medium you saw? I was interested to read your experience, but have no CLUE where to start when choosing which of the many "mediums" we could see. It sounds like yours had some value, and thats as good a place to start as any, right?

Any insight is appreciated!

Her name is Deborah Boardman and I saw her once in college (many years ago!) and this time. Both times I was pretty impressed and since the time I saw here about 18 months ago, some of the things she's told me have fallen into place. It was a crazy experience.

When we were in college she told my friend that her sister was watching over her. My friend is only child and when she mentioned this to her mother a few days later, her mother told her that she had a baby gil who had died before my friend that my friend had never known about.

You can find Deborah if you google her. Have fun.