Oh my goodness, time flies, I've hardly been able to get to this blog because other things just keep popping up! 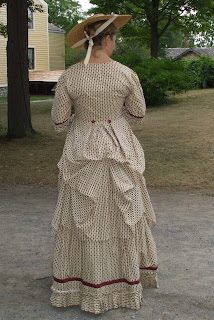 Tomorrow, I'll be pouring the museum's 1803 Fat Ox Ale at the Custom BrewCrafters Autumn  Festival Of Ales along with my friend and co-worker Brian. I'll be in full costume complete with BUSTLE!! He'll be in costume too, sans bustle.

I so adore this dress.

It's an 1870's Victorian dress and it's a copy of a dress described in a Charles Dickens novel. (although at the moment, the novel is escaping me.)

Also 1876 was the centennial of our country so a lot of ladies styles reflected that era as well, so even though it's late 19th Century, it has a touch of Revolutionary War flair to it.

It's even better from the side, I'll try and get a picture tomorrow. It's worn with a full corset and caged petticoat that looks kind of this. The dress sticks out at least 12 inches from my body. 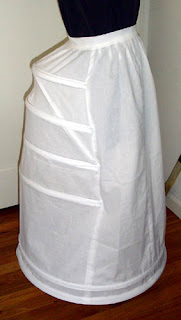 The bustle is called a polonaise bustle and the cage and the bustle (which is part of the top of the dress, it's a 2-piece number)  necessitate a lot of touching of my butt-I usually invite people to do so because it's rather interesting if you've never seen something like this up close before. And many people have not. Most museum pieces of clothing cannot be handled. This dress is a copy and was made recently, not in the 19th Century, thus it's a teaching piece as well as a really pretty dress.  It is also not that difficult to sit in as the cage folds up like an accordion. (in case you were wondering, most people do.)

I first wore it in the fashion show at our Laura Ingalls Wilder event at the museum. It was around 90 degrees in the picture and I'm also wearing elbow length gloves (and carrying a hand fan.)  It was SO HOT in this dress. After the show I got to walk around and add color to the village (no joke!) and people came up to me to get their picture taken with me! Mostly little girls in prairie garb. I felt like Snow White at Disney World.

It's not my dress, but how I wish it were.... I know the woman who made it and I've more than once thought that I should commission her to make one for me. A blue one. Robin's egg blue... Alas, I don't really have that much cause to dress up at the museum so I probably won't. I also need my own corset (they are made to your body) and plan to take the next corset making workshop that I can get into-They fill up FAST!) Everything fits better in your own. The one I wear is a little big on me.

I've been in both the 1812 Fashion Show wearing a very Jane Austenish dress as well as this one in the Laura Ingalls fasion show, so I'm pretty comfortable wearing these dresses in public (at the museum anyway!)  However, there are supposed to be 3000 people at this event tomorrow and only 2 of them are going to be in 19th Century clothing.... That should make for an interesting time!
Posted by Christine at 11:09 PM