Recently Jeannine and I were talking about life and how it ebbs and flows and changes. And I misused the lame quote about how when one door closes, another opens. I said something about how when one door closes you find a window or something silly like that. And we basically decided that finding a window actually sucks because you LOOK through a window to what's on the other side and you can't get to it. A door, on the other hand, A door you go through.

And it was right after Steve Jobs died and I read this great commencement speech that he gave and in it, he talked about connecting the dots in your life and how you don't know, until the time has passed, how one thing leads to another in your life. How seemingly insignificnt things have effects you don't anticipate or imagine.

Again, you can't connect the dots looking forward; you can only connect them looking backwards. So you have to trust that the dots will somehow connect in your future. You have to trust in something — your gut, destiny, life, karma, whatever. This approach has never let me down, and it has made all the difference in my life.
-Steve Jobs Commencement Speech
﻿
﻿ And so we discussed that now that we have some extra time on our hands, how we should do try some new things. Look for doors and not windows. Scatter some dots in the wind and see where they take us.

Today they took us horseback riding...


This was actually Jeannine's addition to the list, but once I heard it, I like'd it even though she didn't think I would. She had been one other time, I've never been.

I found a 45 minute trail ride in a local park and called and made reservations. Being that it was a random weekday, when we got there we were the only people scheduled to go!

We were a little intinmidated by the size of these horses-They were Pertron horses which are Draft horses can can be used for PLOWING...
Jeannine requested the slower one.... I rode a boy named Phil and she had a girl named Lola.  We had an pretty unfriendly guy leading us through the trail. He pretty much kept to himself though so we were able to just enjoy the ride.

We went through trails, over a bridge, through mud and next to streams in a local park. It was a gorgeous ride and I would have liked to take some more pics on the ride but you really have to hold the reigns with 2 hands.

These horses were so lovely. I could see why people get all carried away with horses. They listened to exactly what we told then to do with the reigns. They were gentle and I wasn't scared at all. They were huge and felt huge when you were sitting all up there on the saddle! And I could move mine, with the reigns!!!!! ... That was pretty damn neat!

The 45 min was over way too quickly and I think we would both love to do something like this again. 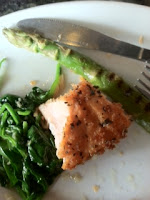 Later we ate lunch at the Mona Lisa Cafe, which we had never been to before and I had a lovely lunch of Salmon, Spinach and Asparagus. We're documenting our trips on film and Jeannine told me I should have take pics of our lunch. She didn't want me to post this one as it's half eaten. So in the interest of privacy, I won't post her lunch...

Posted by Christine at 4:36 PM

This is great that you ladies got out and had an adventure -- and how cool that this was something you'd never done before! I rode MANY times as a Girl Scout and remember only occasionally feeling slightly at ease -- I always seemed very nervous when I was horseback riding. I'm glad I did it, just never grew to love it. (In spite of going to Girl Scout summer camp "Horse Lover's" program -- my friends talked me into that one...)