Cats, Thanksgiving, Seth Godin & My Husband Who is Apparently Going To Drop Dead

Well it's been a few weeks and here are the things I'm thinking about: 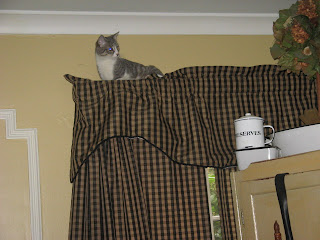 1) Do the rest of you cat owners out there ever think you're going to come home to a dead cat someday? Because, me, I think this.  Half the time there are papers overturned and things on the floor that shouldn't be when I get home. The other day the curtains were actually RIPPED down and the curtain rod bent.  While I was sitting at my desk, she jumped into the shredder bin.... I rescued her from the toy box the other day. Is my house unusually dangerous for a kitten? Do kittens randomly get themselves killed in household accidents when their owners are away?? Kittens are new territory to me. I also got my cat at work and things there are going along swimmingly. I would hate to have to tell them I killed their cat.

2) My Thanksgiving was lovely as was Bess and Adams. I'm fallingf behind again and I'm determined to make it this last sprint until the end of the year with them. I'll be sad to see them go.

3) Seth Godin rocks. I've just discovered Seth and loved Linchpin. I went to preview his book Tribes on my nook and there was no content in the free preview. So I emailed him to let him know because there is nothing more frustrating than downloading a free book preview and having nothing there. I've never bought any book where the preview was not there. Anyway, I thought Linchpin was such an awesome book that it was a shame that he was out there with a possibly frustrating situation to eBook customers. Anyway, he emailed me back. And then his published emailed too to tell me no one ever told them that before. They had no idea about the free preview being useless. The eBook price was also wrong on the B & N site.  Neat. Isn't the internet grand? Check out Seth Godin if you want to be the best at whatever it is you do. Go. Make. Something. Happen.

You know how they send out a nurse to take your vitals when you get new life insurance. Well this nurse took his blood pressure and it was like 157/100 (They sent me to the hospital when I was pregnant with a lower blood pressure than this) She told my husband she gets "high readings a lot" Well that wasn't real inspirng. Later my daughter held up her vetrinerian Barbie to me and told me that "this looks like the lady who came to see Daddy today." My husband confirmed that his nurse did, in fact, look like vetrinerian Barbie. Which left me to wonder if she frequently gets high readings because she looks like a Barbie, because she has a bad cuff or becauause she can't do her job. The next week, his nurse at school took his blood pressure 2x per day all week and she got his normal readings. Vet Barbie called back because she forgot to do something when she was there. He explained the situation to her and she took it again and it was like 150/100. At this point I don't even think she's a nurse. At the very least, I think she may be doing it wrong.

Over the weekend the insurance people canceled my daughter's child rider on his policy because as my financial advisor explained to me today "They don't like to have a rider on a policy where the person might need to "use" the policy. I think that was her nice way of saying DROP DEAD.... She was also calling to ask me about my husband's "dangerously high blood pressure." Don't worry all, he's seeing a Dr just to be sure, but it really is fine. He was  there a few weeks ago with a foot injury and it was fine then as well.

The other obvious answer to this is white coat syndrome which he has never had before. Which would lead me to believe it's veterinarian barbie syndrome. At which point I will want to kill him ( However, I won't as his life insurance situation is currently so tenuous.)

They are requesting a new nurse come out and take his vitals. It better be an ugly one.
Posted by Christine at 11:07 PM

That is just too funny. Here's hoping she IS an ugly one.
Your kitty is normal. She will try to kill herself, or make it appear that she is trying. They are crazy, but they are resilient and they tend to bounce. I have had 4 kittens in the past 11 years and all have been crazy at first. Everything is fair game.
Enjoy!

And this cat.... Well I'm going to feel like a super cat mom if I keep her alive until adulthood....