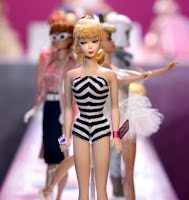 Now that she’s turning 50, Barbie may find herself an outlaw in West Virginia!
Democratic Delegate Jeff Eldridge proposed a bill Tuesday that would ban the iconic doll and all of her plastic clones. The measure, creatively entitled the "Barbie Ban Bill," claims such toys perpetuate unhealthy, unrealistic stereotypes for young girls and women: "I just hate the image that we give to our kids that if you’re beautiful, you’re beautiful, and you don’t have to be smart."
While Eldridge knows most lawmakers won’t sign on, he’s happy to go it alone: "I knew a lot of people were going to joke about it and poke fun at me. I couldn’t get anybody to sign on the bill with me but I said I’m still going to introduce it."
Yes Jeff Eldridge, even though you know NO ONE IS GOING TO SIGN THIS you feel like wasting taxpayer dollars and public servant's time listening to your crap. Even though we are in a terrible recession you think this is a great way to spend your own time and efforts.
I wish I lived in West Virginia just so I could vote against this turkey.
We don't even have any Barbies at our house and this ticks me off. And really, has this guy even seen the Bratz dolls because I find those way more offensive than Barbie. That said, I can't imagine anyone taking this man seriously after this.
Apparently West Virginia must be in pretty good shape if this is how elected officials are spending their time.
Posted by Christine at 10:13 PM

I thought the same thing until I saw this:

Perhaps this legislature was inspired after seeing this on the Barbie shelf at Target...

oh for Pete's sake. Even if you agree about Barbie, you have to wonder about that man's sanity.

At least Barbie has held down a number of jobs (veterinarian and Doctor are all I can think of this second). Bratz dolls have never shown an ounce of motivation.

I am SO tired of grandstanding from legislators.

And although the Bratz girls have never held a job they sure do look like working girls!!!!

I actually didn't even consider that Barbie has had a number of careers when I wrote that.

I imagine the people in West Virginia have other issues they would like their officials to be spending time on, but that's just me!