It Doesn't Hurt To Ask 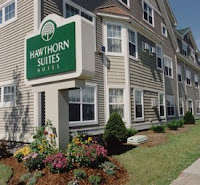 On the way home from vacation, we stopped at a Hawthorn Suites Hotel in Ohio so that I could visit a wholesaler. When I called to make the reservation, the rooms were $124 a night.

I've read a lot of frugality books and they always say to just ask for a cheaper rate. I figure when they tell me a rate, that is pretty much the rate. I went out on a limb with the $111 room though and said,
"Can you give me that room any cheaper?"
She said "I can give you the funeral rate for $94."
"Ok."
I didn't question the funeral rate. I didn't say anything about a funeral. Who even knew there was such a thing as a funeral rate??? Whatever. She wants to lower the rate, be my guest!

Then I asked if she knew where the wholesaler was in regard to Hotel. "Oh yes, are you visiting them? If you are then I can give you the room for $69!"

In a very short amount of time I saved $55 on the room. I actually saved $110 because my nephew was traveling with us and they gave us both rooms for the $69 rate. I had no idea about the wholesaler discount of course but I still would have saved $30 per room between AAA and the funeral (???) rate.

I guess it really doesn't hurt to ask!
Posted by Christine at 10:42 PM