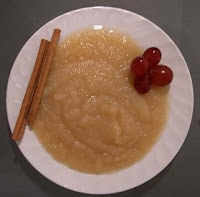 The other night Kristin and Michael had a dinner party with an apple theme. As a favor, Kristin made homemade applesauce. When my daughter got a hold of it, she ate the entire 6oz jar in one sitting! While she was eating it she kept saying "mmmmmmm...." and "mommy have some of this yummy applesauce."

So time to make applesauce I think!

I have an abundance of apples from Kelly's, so all I needed to do was go to the garage and get them! 9 apples and some water and I was good to go. I peeled the apples and took out the seeds. I cooked it until it was very mushy. While I was cooking it I added some cinnamon. Kristin had pureed it as well because her baby was going to eat it and I think that is why my girl liked it so much so I whirred it around with the hand blender for a minute or so.

It is so so good! I used about $2 worth of apples and go double what you would normally get for $2 of the Wegman's brand so this was not a huge savings. However, when I buy applesauce I always buy the natural to avoid the sugar( corn syrup) , and of course, the natural does not come with cinnamon or the smoother texture of the homemade! So I got exactly want I wanted which was also a better product for very little effort. (and less cash)

Kristin told me that you could also make applesauce in the microwave but I wanted to have all that apple cinnamon goodness bubbling away in the kitchen. It smelled heavenly as it was cooking!
Posted by Christine at 4:13 PM