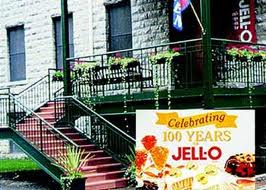 So you may have gathered I like museums.  Last week someone told me about a museum that was close to The Genesee Country Village & Museum where I work,  so I had to check it out.

Yes folks, today I went to the Jell-o Museum in Le Roy.

Actually it's called the Jell-o Gallery, being that it's only one room. There is also a transportation exhibit in the lower level that was fairly interesting with an ox cart to an automobile from 1908 (which made me think of Adam.) 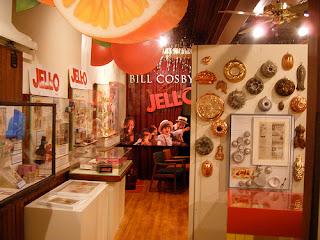 For a tiny museum with a very limited subject matter, it was cute. There was the story of jell-o which was nice, antique molds and uniforms from the jell-o plant, (Cute dresses for all of the ladies!) Original artwork that the first jell-o ads were created from, an interesting experiment where they found that A bowl of lime Jell-O, when hooked up to an EEG machine, exhibited movement which is virtually identical to the brain waves of a healthy adult man or woman (True, this test was done more than once) As well as a lot of (pricless???) jell-o (artifacts??)

I'm not an overly big fan of jell-o but the museum was close to where I work, was only $4, and Jell-o has it's roots in the lovely town (that I had never been to) of Le Roy.  So all in all, not a bad way to kill an hour. (Which is the most you would ever need to see the Jell-O gallery. ) It's on the grounds of the Le Roy historical society which has a pretty  nice garden.I don't know that I would make the trip out there from my home just to see the gallery but it's a fun stop if you're in the area anyway.

The only disappointment (other than the fact that it was pretty cold in there.) was that I was hoping that I could purchase some funky flavor of jell-o. Pina Colada or Margarita (which may, unbeknown to me, be avaliable at my Wegmans.) or something that failed in jello test markets like Asparagus/Orange-Something  interesting. There was no jell-o to be had.  If I owned the jell-o museum this would be the first thing on my list because if you don't want to eat jell-o after being at that museum, then you never will. There were  lot of neat jell-o items, including reproductions of  the original molds (which I inexplicably wanted at that very moment, dreaming of serving Jell-o at my next dinner party...) Don't worry I abstained and tonight am happy I'm not thinking of serving Apple and Carrot Molded Salad  at my next party.
Posted by Christine at 11:17 PM

Labels: About me, Activities for Kids

Have you ever been here?
http://www.historicpalmyrany.com/phelps_general_store_museum.htm

No, I;ve never been there! It's on my list now though! Thanks Meredith!