Where Do You Want To Go? 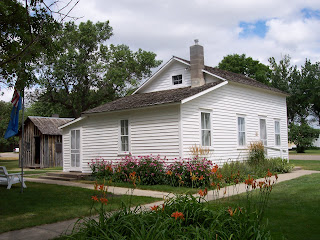 When I was a little girl I read all of the Little House on the Prairie books. After I was done with those, my mom bought me a biography of Laura Ingalls Wilder. In the back of that book are some pictures taken from the Laura Ingalls homesteads that had been made into museums.

They made sad because  I was never going to get to see them.  I noted the museum at The Surveyor's House was in DeSmet, South Dakota.  I could not imagine ever getting to go there and I knew,my parents would never take me there. We had no reason to travel to South Dakota. I pondered the unfairness of life and that I lived so far away.  South Dakota might as well have been New Delhi.  It was rather depressing.

My parents never did take me there.

I, however, got there anyway. One time, I worked in Sioux Falls, South Dakota for a few weeks.  Sioux Falls is about an 1-11/2 hours away from DeSmet. I can't recall how far exactly. Anyway, there was no way I was going to get that close to DeSmet and not go. I took the last day of the business trip as a vacation day, rented a car with my own money, and set off early to realize my childhood dream.

It was a magic day for me. South Dakota is a place visually different from where I live. The clouds were high in the sky and the landscape stretched out far in every direction. The radio plays farm reports and already, in September, there was a cold chill in the air, even though it was a bright sunny day.

I got to the museum and bought a ticket for The Surveyor's House.. I remember saying something like "You have no idea what this means to me." to the woman at the counter and she just looked at me. Of course she did, she probably hears that same line 100 times a week. It was no less true for me though.

When I got over to the house I had to wait a few minutes for someone to come and open it up. While I was waiting, a car pulled and a woman and her son got out while the dad idled at the curb.  He finally shut the car off when she motioned for him to. We said hello and I told her I was waiting to go in and asked if she was too. She got all teary eyed and explained that they had already come 30 min out of their way on their journey somewhere else and that her husband didn't want to spend anymore time or money to go in....She said she had always wanted to come here and she was never again going to get the chance so she at least wanted to SEE IT....I got teary too.

The door opened and I went in and  gave her a little wave as I did. (I guess dreams are like that sometimes aren't they? Some people get to come along, some people don't.)

I stood in the doorway of the pantry which is made up to look like how Laura saw it for the first time.
I stood at the graves of Ma & Pa and Mary Ingalls (Laura and Almanzo are buried in Missouri.)  I went to the other museum at  Pa & Ma's house.  I saw Mary's piano. I stood on Main street where Pa's store had been and tried to imagine a blizzard such that I could not see across the street.  I stood at the site of Pa's original claim and TOUCHED THE COTTONWOOD TREES THAT HE PLANTED FOR HIS GIRLS (Can you say chills down my spine!) I saw Laura and Almanzo's claim and imagined a little white house on fire. The entire day I was giddy with excitement.

I thought of this whole post because when I was at Wegmans today I bought a book from the Bargain Table-1000 Places to go in the US & Canada before you die. (Which included the homestead in DeSmet) I've been feeling some wanderlust lately and an intense need for newness.  It made me think about all the places I want to go and all the things I want to do before I die and the many morals I could draw from the above story. (From don't give up your dreams to don't marry a man who won't give you an hour to live out one of yours.)

But really, I probably wrote it as a reminder to myself. I do have a lot of places I want to go but sometimes I can't see the forest for the trees. Just like that little girl back in my childhood bedroom who knew she was never going to find herself standing in The Surveyor's House in South Dakota, I doubt.  I worry.  I plan. I plan to plan.  I wonder. I don't always Believe... Belief is hard. Sometimes harder than actual doing. No one taught me that I could do whatever I wanted. WHATEVER I WANTED. I have come to that conclusion on my own. And while I know it to be true, sometimes it bears repeating to my un-trusting mind.

Do you have somewhere that you want to go that you haven't yet?

I have been to the Surveyor's House. It was amazing...
Posted by Christine at 11:47 PM

Ok -- this made me teary. And it made me resolve to bring Livvie to see these places! Thank you!

This was such an amazing post, thank you! I've lived in SD my entire life and have been through DeSmet countless times. However, reading through your post made me realize just how special a place it is. Thank you again for the wonderful story!

I told you Deanna. When we retire we can travel all around the country visiting Little House sites like old men visit baseball parks..... They have a new thing in DeSmet now where you can actually go and campout in a covered wagon. I would LOVE that!

Thanks for reading Wanda! It was a wonderful trip. I loved the country out there, it was gorgeous!

This was lovely, and very applicable to my own life, when so many times, I never thought I'd accomplish my dreams. What struck me most about this story though, was the man in the car. This meant enough to her that it put tears in her eyes, and yet, he begrudged her.

I'm sure you remember my wedding--you had to stand forever in a lace gown that you probably never ever wore again--but I'm not sure if you remember my vows. Adam and I were married by a Justice of the Peace who was also a minister, and among all the other promises, he made us vow to always know each other's dreams and help each other accomplish them.

In some ways, that has been the most difficult and most rewarding vow to keep. So to your rule about never marrying a man who won't give you an hour of his life to help you reach a lifelong dream, that you should always treasure the men who work hard to make your dreams come true.

That is very true Steph. And those were beautiful vows. You and Adam have ALWAYS been a wonderful example of true partners.

The thing I've thought about most is how he could let her get halfway there and not go in. Why even bother? Talk about passive aggressive. And her son was with her. What kind of message is that sending him-I hate to think about it.

Steph-I wanted to tell you that 5 of the places in the book of places to see before you die, I saw with you:

Chrissy, we need to add more places to our own personal list and see them together ;)

It's always nice to find kindred spirits. I've been to De Smet four times by now, but I was 30 years old before I went for the first time. I truly remember the magic, and I feel it every time I go -- especially on Ingalls Homestead, the same tract of land that Pa homesteaded back then. Outside of town, just hills and grass and lovely sunsets, run by a great family who prioritize children's activities.

Yes, the Ingalls homestead was the best. Those trees. They floored me....

I took a look at your site! Great! I can't wait to explore it a little more! Thanks for stopping by!

TOUCHED THE COTTONWOOD TREES THAT HE PLANTED FOR HIS GIRLS - Does it GET better than that!!???!!?

Everyone I know thinks I am crazy for saying things like that about all the cool things I love. (I got to TOUCH SAND ON OMAHA BEACH!!) and I dream of the Waltons Museum - a recreation of that wonderful kitchen and those benches!!!

I would love to visit SD and see these things for myself one day....