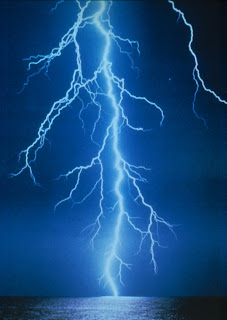 Because friends, when we were out all day on Saturday drinking local wines in the Finger Lakes, my house was struck by lightning!

When we got home there was no phone service, no cable, no Internet. A shelf had been knocked off the wall and stuff on it shattered. A vase and sign were overturned. The refrigerator was off. The alarm system was wonky. When Jeannine plugged in the coffee pot, there was a small explosion which left scorch marks!!! The outlets would randomly work and then not! Very Bizarre.

My neighbors told us that around 3pm there was a loud thunder/ lightning clap over my house that sounded like a gunshot. The wife screamed! I'm glad we missed it.

Cable, phones and Internet are back up and running as is the alarm system. The modem and the cables in the basement were fried. Michael helped with the outlet but I have an electrician coming tomorrow to look things over and install a new breaker. We were lucky that all of our appliances seem to be ok.

At this point I need someone to look at the roof to see if there is any damage. Who does that??? We have a 3 story house and family with a history of falling off the roof and seriously injuring themselves. So NO ONE I know is allowed to peek at the roof-We don't even have a ladder that tall.

No frugal tip today folks, I just thought it was really interesting that my house was struck by lightning. As I tend to be a worrier, I guess I can cross that one off my list. Perhaps I should play the lottery this week.
Posted by Christine at 11:23 PM

wow! Good thing you guys weren't home. That would have scared me to death!

Glad to hear that things are ok.

Hm your the second person that I know who has been "hit" by lightning...thankfully you were far away when that all happened.

Did you find a volunteer to go on the roof??