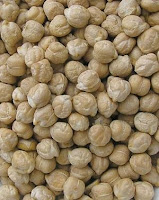 Everyone knows that beans are a great, cheap source of protein. And they taste great too!

Up until yesterday I've always used canned beans. At $0.89 a can, they seem like an obvious deal. I've conveniently ignored dried beans because, well, they seem so inconvenient.

But really can you call yourself frugal if you don't eat dried beans?

So, I took the plunge!

I pre-soaked them overnight-No biggie. Took all of a minute to rinse the beans and fill the bowl with water.

The next morning I boiled them during breakfast and cleanup. Maybe 30 minutes. (Maybe 40.) Anyway, it was pretty quick and painless. There was nothing to it. Dried beans are EASY too!

I made a big batch of hummus that we have had for lunch for 2 days now. Spread on Pita's with veggies on the side. We still have a bunch left!

This evening I made this super simple salad:

This was so yummy and I had everything on hand to make it. I controlled the urge to put feta into it because I wanted to see how good it was on it's own.

I know $0.89 doesn't seem like a big deal. It isn't too me either. BUT the cost of the dried beans worked out to be roughly 1/2 the cost of the canned. Still not convinced? Would you pay $10 for a steak when you could pay $5? In the name of convenience I don't think there is anything wrong with canned beans but I think I'm going to try a lot more dried beans in the future. Also, I bet of I looked around I could find beans cheaper than $1.39 lb, thus making my savings even greater.
Posted by Christine at 10:58 PM

Yay! I'm so glad you considered dried beans. It made a huge difference in my food budget, but we eat a LOT of beans!

Well the funny thing is that since I made those dried beans I've had cooked garbanzo's in the fridge and I can make hummus or throw them in a salad and I'm working on ways to add more dried beans to our diet.

It's not that I couldn't have done it before with canned beans. I guess the whole dried bean experiment has made me more aware of what a great cheap protein beans are!

One thing I've found that makes it more convienent is to soak the beans overnight, then throw them in a slowcooker the next morning. Then I don't have to worry about them again until the following evening. This works well for me since I work full-time.

Oh thanks for the tip! I've never thought of doing them in a slow cooker before!