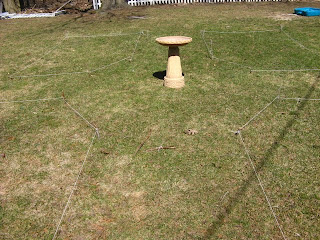 Finally, after a long winter of staying inside, this weekend was nice enough to work outside in the garden.

Oh, that doesn't look like a garden, well it's going to be! Look closely and you can see the faint strings that I laid out over the weekend outlining it. I had to do it twice because the first time it was not large enough. This took me much longer than you would imagine thus, this is really the only gardening I did!

I have been dreaming of a 4 square herb garden for a few years now and have not yet had the time or inclination to follow through. The center where the birdbath is will be a circle filled with Lavender.

I'm having a lot of trouble with a theme for the garden. And I REALLY wanted a theme garden! My original intent was an heirloom garden (in 4 square design) that would showcase what people in the 13 colonies had available to them. It would be food and herbs as well as plants used for dyeing material and ornamentals. But the in speaking with the garden head of the Genesee Country Museum, he informed me that in general, common people did not lay out their garden in such a design. (and I really want that design!) So apparently what I want is all in my head. He was nice enough to point out that I could still plant in that design and call it an heirloom garden...Um yeah, but I'm a stickler for accuracy....

So I based the design on a picture in the Colonial Gardens Of Williamsburgh book which was for an herb garden only. In my research, Washington and Jefferson (who would have had more use for a formal (English) designed garden-Washington more than Jefferson actually) separated their edibles and ornamentals. And their vegetables were laid out in traditional row styles.

So this is turning out to look more like a French Pottager if you will. The French pottager does have it's roots well before the 13 colonies but the theme is not supposed to be French.

More later on how I'm building up my soil!

I can see it already.

Can't wait to have a sunny spot for a kitchen garden like that one!

I can see it too!!! I'll be posting more photos as it progresses so check back!

Ooh! This will be lovely! I can't wait to see your progress! BTW - when you spoke with the man from GCM, did you also lodge a complaint for not getting picked to stay there last summer? Just curious! ;)

Um no! I really wanted the garden info so I thought I better be nice!!

I love it! It looks a lot like the plan I want to use in my new yard! Create a Kitchen Garden With 4-ft. Raised Beds

Yah I can see you being a stickler, the whole black is black, white is white, grey doesn't exist.

That being said I'm sure your garden will be lovely.

I like that! (Love that catalog too!) It looks like they are utilizing the square foot method, which I plan on doing for the veggies in it at least! I like the layout!