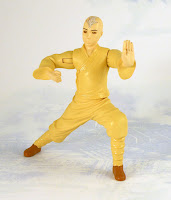 Today I threw out The Last Airbender.

I've tried people. I really have. I try and save all of those horrible little plastic toys that make their way into my daughter's life-I don't even know where half of these things come from. Some are second hand. Some are from trips to McDonalds with the grandparents (hence weird arrow head guy). I'm not gonna lie, we have a lot of plastic dinosaurs and lately, silly bandz seem to be multiplying like rabbits. I'm partly to blame. But only partly. Half of this crap I don't even recall ever SEEING. They come from grandparents and garage sales and birthday parties and read-a-thons at the library and pre-school.  The list goes on. Why are we plying our kids with such temporary useless junk?

I stick them in the donation box for the Salvation Army whenever I can. I amass them to give away for free at garage sales. I pawn them off on others when I can.

And now I've just HAD IT. There are way too many. WAY TOO MANY. It's too much overhead. Too much mental energy I'm expending trying to determine how to dispose of all this little junk. Precious moments and brain cells that I will never get back because I've spent them managing PLASTIC SHIT. Hell, I'm even spending 30 more minutes writing a blog post about it.

I'm pissed off that I have now resorted to just throwing things like this away. As I did it, it crossed my mind that in 100,000 years people are going to wonder what in the hell we were trying to convey with a plastic figure of a boy with a clear plastic arrow in his head because I'll tell you, that damn little toy will probably still be around.

I sure like to meet the person(s) who think that creating a gazillion small plastic pieces of crap out of the earth's resources is a good idea. Really... If you feel like it is, please come to my house because I'd like to punch you in the nose.

It just needs to stop. Currently there are enough plastic figurines to supply every child in the WORLD. (Ok, I haven't done a study or anything but I bet there are.) Just like Christmas ornaments, we have enough. We ALL HAVE ENOUGH. Nothing bad would happen if another plastic elmo was never produced in China. Really. The earth would probably take a deep breath and exhale.

(Sorry about the language folks, I tend to swear too much when I'm agitated....)
Posted by Christine at 9:59 PM

I know how you feel. I hate sending my girls to b-day parties because I know they are going to come home with a plastic bag and candy and plastic junk. My philosophy is to make sure the Goody bags I give out don't contain plastic and candy.

There is a project OPERATION CHRISTMAS CHILD, many churches participate. You could keep a box by the door and toss all those useless little plastic bits in and then send the box to a church that participates, these items are perfect for the shoe boxes (although I would prefer they didn't exist as to pawn them off on someone else).
Happy Meals - my girls used to get happy meals when they had say beanie babies in them or something of that nature (when the toy is plastic junk we didn't get them). At some point we just switched to ordering from the dollar menu, $1 McDouble or McChicken and $1 fry - we bring our own drinks - and more often than not the girls will ask for the $1 side salad. So for $3 my girls get a decent fast food meal and no toy....
Speak to the other adults in your life, tell them you are trying to reduce your plastic consumption, and ask them not to give your daughter all this extra plastic.
I have for several parties asked that my daughters not get treat bags, and when I explain that S can't have the candy at all usually she gets a special bag with real fruit leather in it.... sometimes parents just need to know there are other affordable options.