S/He Who Shall Not Be Named

Until we find out his/her gender for sure!!! 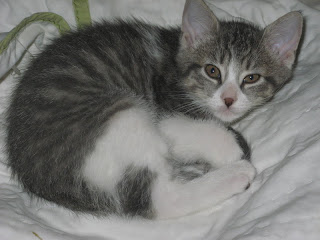 Yes folks, we thought it was a boy, but it looks like our new kitty just may be a girl. If you've never seen a kitty butt before, it's actually kind of hard to tell. Saturday I had both my husband and Leighanne studying illustrations from the internet and then gazing quizzically at the kitty's nether regions.

Whatever it is, it's a cutie and we're all settling in nicely together. 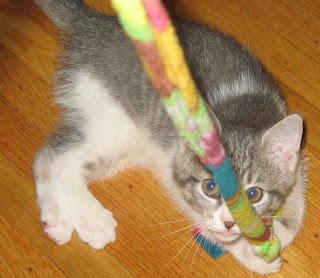 The first night it was pretty docile and I thought "Well isn't this just about the easiest thing, having a kitten." The next night it RAN ALL OVER ME. ALL NIGHT LONG.  And continues to do so. Why was I sleeping with it you ask? Well, the first night it decided it was not sleeping in it's new kitty bed AT ALL and as I was laying there it's started clawing it's self up the bedspread and landed up at my head. It thinks that is where it belongs. And I don't know how to convince it otherwise because it just keeps climbing back up. 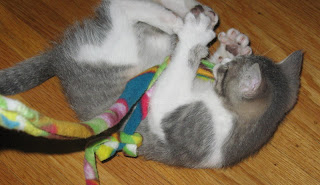 It's actually smaller than it appears in these pictures.
Posted by Christine at 11:00 PM

What a cutie!! You know, Garbo appeared to be a girl at first (hence the name Garbo...), but it turned out his "stuff" hadn't quite dropped into place. Had to have a little procedure to fix that (lovely, I know). Anyway, the name stuck. Not to say it's the same thing, but it is hard to tell on a cat! Can't wait to meet him/her -- I haven't told the girls yet, they will flip out!

How old is your kitten? I have heard of people naming thier kitten only to find out it was the opposite sex. When we picked our kittens up at exactlty 6 weeks I was pretty sure we had a male (Twizzle) and a female (CutieStar), but everyone and everything told me it would be hard to tell so I doubted myself. Turns out I was right.
At any rate GreenGirl and GreenTween were at the museum on Saturday with my Mums and saw the other kitten and thought it was oh so cute.

That is one cute kitty!