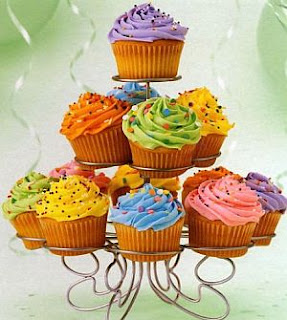 I'm usually of the mind that food made at home is cheaper, healthier and tastes better than store bought or mixes. I can think of only one exception and it's the Wegman's Ultimate Chocolate Cake-My favorite cake!! But that little gem IS expensive and probably has things in it I wouldn't want in my food. (SO I don't read the label!)

Tomorrow is my girlie's 4th birthday celebration with family. (Lucky for my wallet and sanity we have not started the kiddie birthday party thing yet.) She wants pink and purple cupcakes with princess sprinkles. (I have translated that to mean pink and purple shiny sprinkles but I could be WAY off on that one!) On the plus side, I have a CHEAP killer cupcake recipe! I recently had cupcakes from Wegman's that were good. Probably full of crap. Let me tell you, this cupcake kicks the Wegman's cupcake's butt! (Did I just write that? I used to think of myself as edgy..Now I'm threatening a Wegman's cupcake....)

This recipe is by no means health food. It's all white flour. The icing is sweet enough to make your teeth hurt but it actually DOES pipe onto the cupcake like the ones you see here in the picture. The cake is not too sweet so it is actually a great cake for the icing.

It's simple! Not much harder than using a mix.There is nothing in this cake that you don't already have in your home.

It's made with real butter-I AM a butter snob, I'll admit it.

And really, it's a great cupcake!

I was going to type it out, but really, it's not my recipe so I'll just link you to it!

It calls for self rising flour but you can make that yourself at home. For each cup of all-purpose flour, add 1 1/2 teaspoons of baking powder and 1/2 teaspoon of salt.
Posted by Christine at 11:19 PM

This looks really good! With all of the birthdays we have I need a good cake recipe. Thanks for posting it!

Did you guess right on the sprinkles? You know, purple and pink cupcakes with princess sprinkles sounds good right about now!

Those sound yummy! I love cupcakes, especially the over iced kind.

I hope your girl enjoyed her family party. I can't believe she's 4 year old! Next you're going to post about her graduating from college!

The cupcakes were great. The party not so much as it was canceled because of the weather! Then we were busy last night and then today it was crummy again. We're trying again tomorrow night but only my parents can make it. It's going to be a VERY small party!!!

She loved the sprinkles Krista. They are actually really pretty!

That cake recipe is great and cheap!

I printed the recipe - sounds even better than the Texas Dr. Pepper Cake!