Last Friday evening I got to have dinner with some friends from High School. Among them was my first boyfriend Paul.  I have not seen him in 15 years.

Much has in 15 years-He lives in California. We each have spouses and surprisingly, children with the same birthday! None of us (except for Jeannine and I ) had seen each other in that time frame but  in no time at all, everyone at the table was laughing and reminiscing.

At one point I stole a sideways glance at him and there he was. I know that sounds strange as I clearly knew I was sitting right next to him, but what I mean to say was that it's been so long, and yet looking at him it did not at all seem like it's been 15 years since he last sat next to me.  I think that speaks to the fact that time does, indeed, go by faster than you think it's going to.  Also to the fact that essentially we are all the same at a soul level and that's why it's so easy to pick up with people where you left off.  I mean we all have that experience don't we? And when you recognize someone as a friend, time and space matter little.

On Saturday Leighanne and I made our way up to the Thousand Islands.

On the way we stopped by to see my EVEN OLDER BOYFRIEND ADAM.

I brought a big boquet of sunflowers and the diary. And we COULD NOT FIND HIM despite the fact I wrote down his location. I kept talking to him to ask him to please help me out. I even ventured away from the area that I had written down the information for in a serious quest for him.  I was frustrated.

We left a little disappointed but I knew he wasn't going anywhere.  I figured I would find him another time.  Leighanne looked him up for me (Apparently I wrote down the information wrong) and on Sunday she graciously offered to take me back there. (I had given the sunflowers to her mom and I think it was probably better that way.)

This time we found him right away!!

The funny thing is that he was RIGHT ACROSS from the area I had ventured to from where I though he was. All I needed to do was turn my head to the left and I would have seen him!! The whole time I was asking him to help me out I was slowly making my way to him (Apparently this is yet another lesson for me to just trust things as they unfold. God, when can I stop learning this one anyway??)

Anyway, there they were, him and Bess. I picked a flower from a nearby grave with a lot to spare (Sorry, Mr Clark) and took some pictures of the diary on the stone.  I also took some pictures of me sitting next to the stone but those seem like they might be a little inappropriate to post. I'm not doing anything lewd or untold, it's just seems strange to me. Leighanne asked if I needed a few minutes alone (only half joking I think) and took her dog for a walk.

I know he wasn't there really but his hands are. The same hands that held the book and wrote on the pages. I wonder how long it's been since he and Bess had some visitors. He died when he was 59. I wonder, at that point, if he even still knew where his diary was. In fact, I was confused wondering if he was still a 26 year old newlywed or a 59 year old man. And then I got the same answer I did on Friday. He's the same. Just older. But the same. 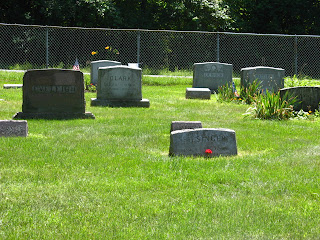 You know this may sound a little morbid but I  believe in an afterlife and I really hope that when I get there Adam and Bess will be there so I can talk to them.

The picture with the journal on the headstone is the COOLEST PICTURE EVER!!

I can't wait to hear more!

Thanks Krista! I knew you would appreciate it!!!

I just think it was so cool that you went there, and brought the diary! Most people do not even think about such things but they are totally missing out.
It just makes everything more real - you can read something in a book or in a journal but it really hits home when you know these people were REAL and LIVED.

I think so too Meredith!

I might just be emotional, but this made me cry. I'm very moved that you did this.

Awww..Thanks for following this with me Steph.

Okay to the first half of this post my heart filled and released with a sigh. We had a nice nite, I'm glad we could add another memory- I PROMISE i won't forget this one.
As for Adam- wow, I cried too. What a gift.

Don't worry, even if you do I have it filed away in my memory banks for when you need it.

And yes, it was pretty neat!