We were away for the weekend and I came home and found that I had left the deer fence open. Surprisingly nothing was eaten so I figured it was time for a garden update!  Notice I'm not showing the garden in it's entirety. That's because it's FULL of weeds from the heat/rain we've had. 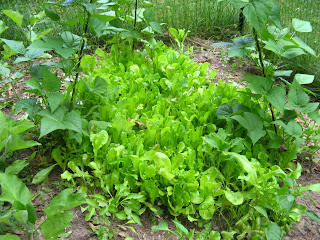 Salad! We have a lot of beautiful salad greens and beans growing. I tend to grow the greens under the bean tepee because the beans tend to shade the greens just when it's getting a little too hot for them. This year it's already too hot for them though and the beans aren't fully gown. A few of these look like they might bolt if it's gets much hotter. It's supposed to rain for the next few days though. 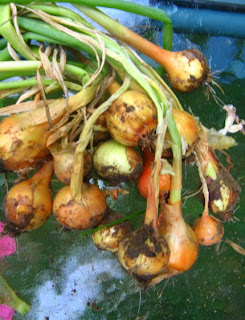 Some onions I harvested today. I don't grown huge onions. Not by design or anything, they just don't get that big. That's ok though because I usually don't use a big onion for cooking anyway. 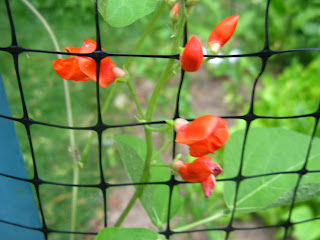 Scarlet Runner Beans. My grandma grows these each year for the vines and flowers more than the actual beans. I think the flowers are so pretty. I have a ton of beans this year. I don't even really like beans.  I do make these pickled spicy dilly beans that everyone loves that I whip out for the holidays. (I don't really like those either.) 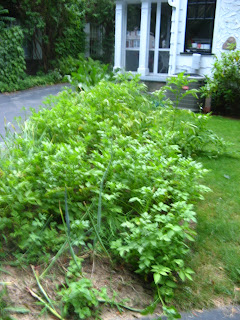 klk
A terrible picture of my potato/onion/garlic garden. The garlic needs to be dug this week (when it dries up). As well as those onions in the front. The rest are my LaRatte Potatoes (with a few yukon gold in the back.) I'm digging some tomorrow for the first time because we're having people over for drinks and I'm serving them roasted with a green goddess dip. 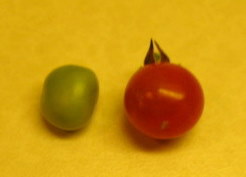 Tiny currant tomato. It's next to a PEA!!  It's a pretty large pea, but still. These are so cute and I'm growing the plant in a pot. I thought it was a hybrid (I know, I'm a dirty hypocrite) but it looks like it may be an heirloom after all. It's delicious.  I only have one plant. Next year I'll do more those because these things are very cool.
Posted by Christine at 10:50 PM

I love beans, all types of beans. Would you share your recipe? I owuld be happy to take your scarlet runner beans off your hands......

Yes! I will post the recipe in the next few days as bean season is nearly upon us!

I love dried beans in just about anything. It's just fresh beans that don't really do it for me.