On Friday morning I went to parent visitation day at my daughter's school. It was also the day of the book fair.

Almost as soon as I arrived at my daughter's first grade classroom she started acting up. When one of her classmates hugged me she glared at them and said "That's not even YOUR MOM." She fidgeted, she whined.... I asked her teacher if she was always like this. (NO!) I chalked it up to the fact that perhaps I was a distraction so I told her to stop and ignored her antics. The teacher finally asked her if she was ok, to which she burst out crying that she didn't feel well and had a headache. After a quick trip to the nurse we determined that she had a 101 fever and that I should be up for mother of the year again...She was stricken that she was going to miss the book fair so we stopped on our way out the door.

Which explains how we came to possess Magic Pony, Ghost in The House. My girl REALLY REALLY wanted this book.  It didn't look all that promising to me, and I'm pretty sure my girl was sucked in by the overly precious and cheesy cover. (Look at THOSE HEARTS) So we went back and forth a little but I acquiesced in the interest of time &  because she was sick and bought the book for her as well as Judy Moody Girl Detective which I thought looked better and that my daughter didn't particularly want (What can I say, I grew up on Encyclopedia Brown....).

So we read Magic Pony, Ghost in The house this weekend. And let me tell you HOW MUCH THIS BOOK SUCKS.  The basic premise is that the main character has a poster with a pony that comes alive when she needs him. In this particular book she has to take care of another horse, who belongs to a  "friend" of hers. After she takes care of the animal she goes over to the girls house where the, "friend," a snotty rich girl and her friend make fun of and scare the main character. RATHER than rise above the situation, the main character comes back with the magic pony to scare the girls and give them "a taste of their own medicine." she even leaves the girl's house a mess in retaliation. SERIOUSLY. This is ALL that the book was about.  Oh yeah, she takes a ride on the horse after getting back at the snotty girl....

Who would write this crap for kids? And who on earth would publish this book. Not only was it poorly written, the message sucked.

I used the opportunity to have a "discussion" about the book.  I figured that maybe I could use this terrible book for good, and said "Oh my goodness, I can't believe she did that. What do YOU think she should  have done?" which garnered answers like "Tell an adult" and "Leave the mean girls house." Both fine answers, but I completely led the witness. We didn't have a "book discussion" I told her what to think... Later I justified this by telling myself that part of my job as a parent is instructing my child regarding how I think she should treat other people or deal with mean kids. (But we didn't have a book discussion....)

Just because books are for children they shouldn't be low quality. That book was High Fructose Corn Syrup for the mind. I almost want to write a one star review of this book on Amazon.com but there are no other reviews and I can't be that mean. 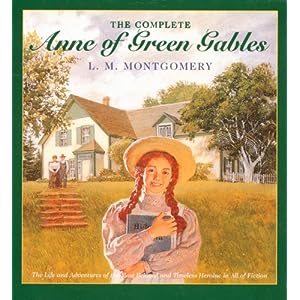 My daughter just spent the last week enthralled by the magic that is Anne Of Green Gables. Now THATS a wonderful  book for children. (For anyone really)  When Anne got her puffed sleeves (one of my favorite parts of the book) my daughter wore her Halloween costume over to her grandparents house because IT HAS PUFFED sleeves. Now that's a connection to literature. The realization that we are not alone, that we relate to characters, and situations and life. That is what reading is about. Those puffed sleeves. That is what I want my daughter to take away, not that it's ok to retaliate if someone treats us badly.

It's all good I suppose. Up until now, when we've read books together, it's been with the assumption that the author is good or just or  presenting a world view that we agree with. We've never tackled that sometimes books are poor quality or we don't agree with them or that the author's message just isn't a good one. I still don't think that's a lesson she quite gets at this point, being that we've never read a book with this poor a message before.