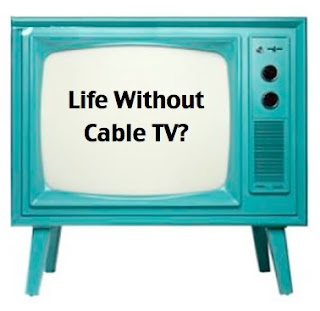 So I wish I had something big to talk about after my dear friend's monumentous book launch but I just don't. How can you follow that anyway??? (and I'm too tired for my last Adam and Bess post!)

However, I did do something big for my family today!! I returned our Cable TV box. We have officially cut cable from our lives.

That's only partly true because to get the all in one package that includes the digital phone and roadrunner internet you need to have at least basic cable. $12. I think you get like 13 channels.

And they all stink.

However, the way the math works out, it's cheaper this way. Whatever.

I would have done this years ago, however, I'm not the only person who lives in this house. The only real reason we kept it so long was polotics and sports and everyone in this house is now convinced that you can get your fill of both on the internet these days.

Another deciding factor was that we don't love commercial TV for our daughter. For a while she would watch shows on PBS and Nick Jr because they don't have commercials. She's kind of outgrown the Nick Jr shows but we don't like what we see when she watches commercial TV-In her or on the TV.  As an unintended consequence, she's bored by the nick jr shows we still let her watch she hardly watched any tv at all over Christmas break. Perfect time to make the switch. And there is still PBS if she wants to watch something.

We also go to the library a lot and can rent almost any video you can think of.

We'll save $732 plus tax this year but it's less about the actual dollar amount than it is about the fact that we've been paying for something that adds little value to our lives. Why would we do this for so long?

As a small aside I will also admit that we watch TV on a 13 year old TV set. We don't have HD anything, where your viewing experience would be enhanced with digital cable. (Don't feel bad for us, we're not poor, just not that interested.)

And yet today, before I went to return the box, I called my husband to confirm once more that we wanted to do this. We actually made the decision in Nov but needed to go to the Time Warner store to take back the box. I don't even know why I had this pause.I don't even watch TV really. I like to save money. I've stated my reasons above. It still felt strange.

While I was there, I was one of 3 customers in the store. We were ALL returning our cable boxes and cancelling cable.

Is this a sign of the economy or is it just that people don't feel like they are getting much for their money?

The only reason to go to the Cable Store is to return the box or pay an overdue bill and get your service turned back on.

I completely agree. I can't help but think that Time Warner needs to do something to make pay TV a better option. The selection isn't that great, the cost is high and increases every year and there are increasing options out there for people. We're consiering netfilx at our house but only after we live awhile without anything.

Additionally, I don't find their customer service all that great. Yesterday at the store they were unable to schedule a shut off time. Today they called and TOLD me it was tomorrow between 8 & 12. Sorry folks, I have a job. We'll schedule this areound MY schedule....

We did the very same thing, brought back our box the Monday after Christmas. We do, however have Netflix, the cheapest option, which *I* could do without as well ;-)

So how come we're paying $65/ month for internet and those 13 channels? No land line here. I think I will be giving them a call to see why there's such a big difference.

anjac-from what I've seen, each option IS cheaper the more you have, so possibly because you don't have the 3 things.

The phone is one I go back and forth over. We have cell phones and I've considered just cutting the phone altogether-It DOES seem rather sill to pay for 3 phones. But then I keep my phone on and with me at work because I am away from my daughter. I would hate to have to screen all of my home calls at work. I know I could put it on vibrate but then I would still need to pause and look at it every time it vibrated to see if it was my mom (who watches my daughter) I just don't have a good answer for this one yet.