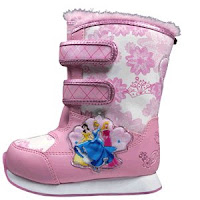 Today my parenting moxie was tested. Not by something major and earth shattering mind you, but by a pair of Disney Princess Boots.

As I dropped my girl off at pre-school I told her I was going to buy her some boots. At that very moment she was walking by another girl and looked down and saw what I thought were an ugly pair of Disney Princess Boots. She looked up at me with the sweetest little voice and said:

I was non-commital, mentioning that I didn't know where her mommy got them.

Apparently her mommy got them at Marshall's because they were RIGHT next to a pair of HIGH QUALITY black and purple boots that I wanted to get her.

I'm not much of a Disney Mommy. She's never seen the movies, I didn't plan to be a character buying parent (anyone who saw the red Elmo cake I made for her 2nd B-Day can laugh right now if they want.) and I don't like the idea of marketing to children. And I also think most character clothing looks cheap.

These princesses have come into our life through means completely not of our own making-through books she's been given and other girls at school with princess stuff.

Ok, it's not like I think the Disney Princesses are evil or anything extreme like that. It's just that I find the older Disney princesses vapid and longing only for husbands. It actually says in the book that the dwarves asked Snow White to stay because she COULD COOK. (one hopes that at least when she was wisked off by prince charming (who was actually a COMPLETE STRANGER), that she would at least have some domestic help to help her get over picking up after 8 sloppy men for god knows how long!) At least Belle in Beauty and The Beast likes book and gets to KNOW the Beast and loves him when he is a beast!

To my chagrin these princesses are enchanting my little girl.

What to do? I walked around that darn store with the purple boots for 30 min. I called Deanna over this moral crisis. Would I buy the nice sensible high quality boots or would I cave and get the princess boots. I would never choose something like those boots for her and yet, she, herself would be so pleased with them. I never say yes to stuff like this. Am I letting an ideal I don't support into my house on the soles of her feet or am I over thinking this?

I came to the conclusion I'm not any fun anymore and I bought the princess boots.

The only frugal thing about this entire activity is the fact that the Disney Boots actually cost less than the High Quality Purple Boots.
Posted by Christine at 11:17 PM

1. They outgrow boots so fast when they're little that does it really matter if they're high quality? It's not like buying a shoe for ourselves where we're hoping it will last many years.

2. They're only little once. Someday when she's grown and gone, you'll look back and think, "I'm so glad I got her those princess boots..."

2) You're COMPLETELY CORRECT! Thanks for the perspective.

3) My girl is a true gift in my life, you're right about that as well. I think I need to lighten up.

Ah yes a moral dilemma indeed! I'm not a huge fan of Disney apparel either. However, I'm happy that you let the princess boots win this time around because I'm certain the look on your daughter's face was priceless.

Christine, I can completely relate to your post! Avery recently needed sneakers. Rather than the higher quality, much more practical sneakers that I had picked out, she chose light-up, velcro Tinkerbelle sneakers. So ugly, in my opinion, but she LOVES them! In fact she asked me if I could please also buy the next size so when she outgrows these she doesn't have to give them up! Ha! Sometimes being a good mom means loving something just because our little girls love it.

That is hysterical that she wanted the NEXT size too. She must really LOVE them! And to be truthful-I would have probably loved them when I was little too! (and my mom would have bought them too!)

OMG! You crack me up! YEAH for the princess boots!!!!!!!!!!!!!!!!! And I disagree - you are still LOADS of fun! (Though I will admit that reading your online tale of moral dilemma over buying your daughter the cutest little pink princess boots, and that you needed consulation to do so, was... well.... um, made me feel a little saner about some of the things I tend to over think.) :)
All in all a good choice was made and your daughter is happy.
Though the PURPLE ones would have been nice too...
PS my husband just reminded me that I am about to put on my Eeyore denium jacket to go and meet some friends (hey its a nice warm coat), and that I do have a SMALL (only two) collection of Disney cookie jars,so perhaps you would not benefit in the future to call me for advice on buying Disney or not...

Leighanne-You are also the one who bought my girl the BIG ELMO CHAIR THAT LAUGHS AND SHAKES WHEN YOU SIT DOWN ON IT!!!! So no, I probably will NOT call you in matters involving Disney boots!!! You crack me up-Your Eeyore jacket!

LOL!!! That's right I almost forgot about the Elmo chair. Oh that makes me laugh even harder now! Gosh if they only made a big person's chair that shakes and laughs when you sit on it. Imagine how happier we all would be!

That's why I love you Leighanne!